Philippines’ largest media and entertainment network ABS CBN goes off the air after the National Telecommunication Commission ordered it to stop operations due to the expiry of its legislative franchise.

Legal Plight. It can be recalled that NTC Commissioner Gamaliel Cordoba assured members of the House of Representatives that the agency will heed the advice of the Department of Justice allowing the network to operate whilst its franchise renewal is still pending in Congress.

However, Solicitor General Jose Calida filed a quo warranto petition against the network and warned the NTC against granting a provisional authority. Cordoba, along with Deputy Commissioners Edgardo Cabrios and Delilah Deles, signed the NTC order on the network to cease its TV and radio broadcasting stations nationwide. Cabarios denies that the NTC was pressured by Calida.

Shutdown. ABS CBN signed off at 7:52pm yesterday (May 05) after airing the national anthem and naming its engineers and TV stations. Included in the shutdown are five AM stations: DZMM, 18 FM stations, and 42 TV stations including Channel 2 and Channel 23 – leaving approximately 11,000 ABS CBN employees jobless.

ABS CBN President and CEO Carlo Katigbak claimed that the network ‘has done everything and has not violated any law’. Moreover, Company Chair Mark Lopez revealed that it was painful to go off the air but the company is not losing hope. After the announcement of the network’s shutdown, #NoToABSCBNShutDown topped Twitter’s list of trending topics in the Philippines as Filipinos aired their reactions.

Moreover, ABS CBN issued a statement regarding the Cease and Desist Order by the NTC: 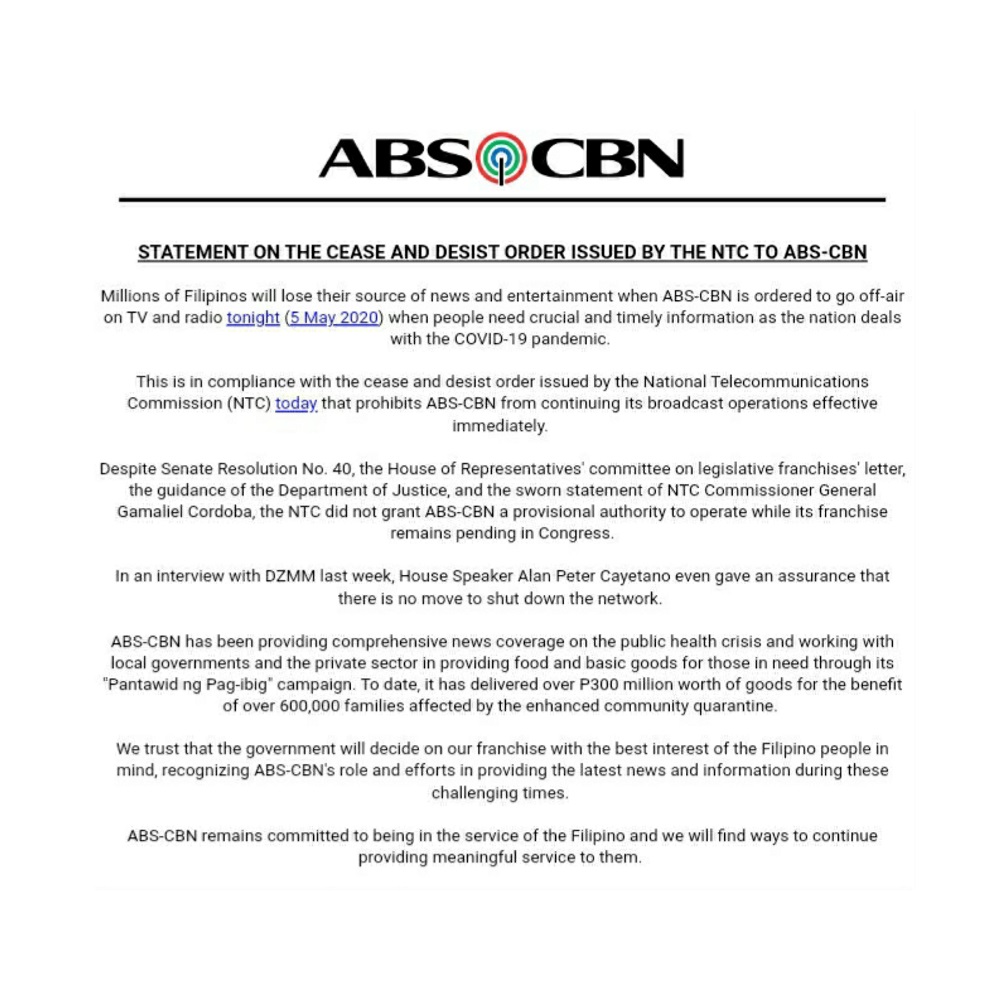 Several talents and anchors of the network expressed their dismay over the network’s shutdown.

“We will not be silenced despite this attack on our democracy and press freedom. In the face of this challenge facing our company and livelihood, we will not turn our backs on you. We, you, are ABS-CBN,” states Former Vice President and TV Patrol Anchor Noli de Castro.

“I may never get used to seeing my dark TV screen when it’s set to ABS-CBN. No amount of bashing and trolling will change the hearts of all those who are committed to be in the service of the Filipino. We will somehow continue to do so,” states Gary Valenciano, singer.

“Iniisip at inaalala naming artists ng aming tahanan, ang ABS-CBN, ang ilampung-libong empleyadong lumaki nang kasama ko, at ang mga batang bagong empleyado pa lamang ng aming istasyon. You are all in my heart and prayers. We love our home. And some people have made us homeless now. May God bless us all,” states Sharon Cuneta, singer.