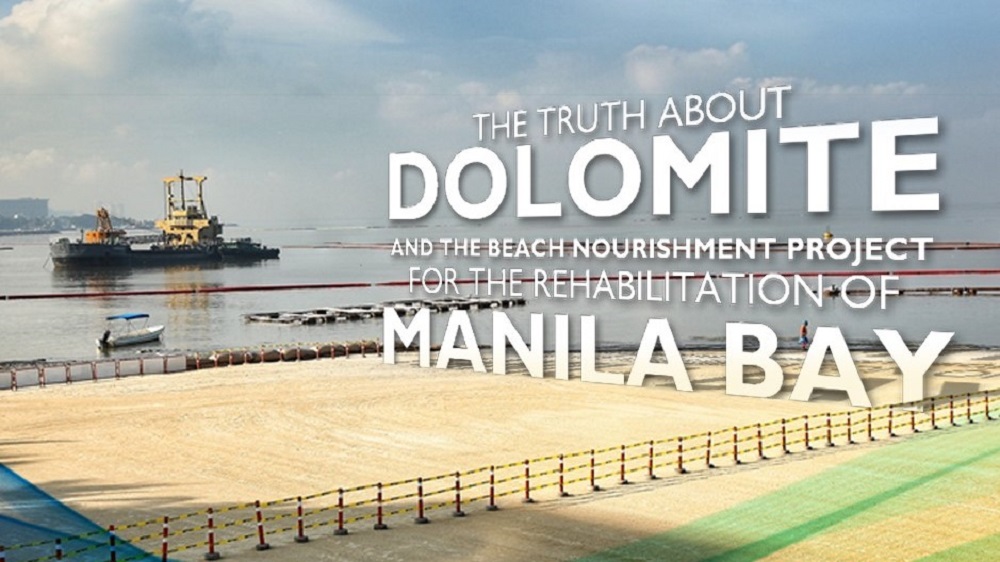 The Department of Environment and Natural Resources (DENR) recently posted a narrative about the truth behind the controversial dolomite and the beach nourishment project for the rehabilitation of Manila Bay.

“The Department of Environment and Natural Resources wishes to extend its sincerest gratitude and appreciation to those who have expressed their understanding and support for the Manila Bay beach nourishment project. And so we’d like to shed light to some of the frequently asked questions about dolomite and the beach nourishment project for the rehabilitation of Manila Bay,” in a social media post by the DENR.

Is dolomite detrimental to the ecosystem of Manila Bay, as some critics claim?

“Dolomite is not detrimental to the ecosystem of Manila Bay. It is a mineral, a naturally occurring chemical compound – calcium magnesium carbonate. It occurs also in the form of sedimentary rock, which is commonly found in seas. Sea coral itself is calcium carbonate similar to the composition of dolomite. Dolomite is, therefore, not foreign to the coastal ecosystem. Dolomite is, in fact, known as a neutralizer that lessens the acidity of sea water – the reason it is widely used in fish aquariums.”

“No, crushed dolomite used in the beach nourishment project does not pose  threat to human health, because it is not inhalable. Only materials (whether natural or synthetic) that are 10 micrometers (microns) or smaller are inhalable; these pose a health hazard when inhaled because they can reach the lung tissues and enter the circulatory system. Fine beach sand and sediments; being around 90 microns (9 times bigger), are therefore not a health hazard. Crushed dolomite is much bigger, measuring about 2 millimeters to 5 millimeters in diameter, or about the size of a grain of rice/corn – which is 100 times bigger than a particle of dust.”

Is it true that the implementation of the Beach Nourishment Project is very untimely, considering the COVID-19 situation in the country?

The project’s implementation is not untimely. The project was approved by Congress under the 2019 General Appropriations Act. It underwent competitive bidding under Republic Act 9184 (the Government Procurement Reform Act), and the contract was awarded prior to the global pandemic. The government cannot simply stop a project when it is already under a contractual obligation to proceed. Beach nourishment mainly aims to rehabilitate and protect the coastal resources in the area to prevent coastal flooding and erosion. The project was conceptualized, budgeted, and approved by the Department of Budget and Management in 2019, when there was no incident yet of COVID-19 in the country. A memorandum of agreement with the Department of Public Works and Highways (DPWH) was signed between October and November 2019, and the DPWH started its implementation in January 2020.

More questions are answered on the DENR website here.