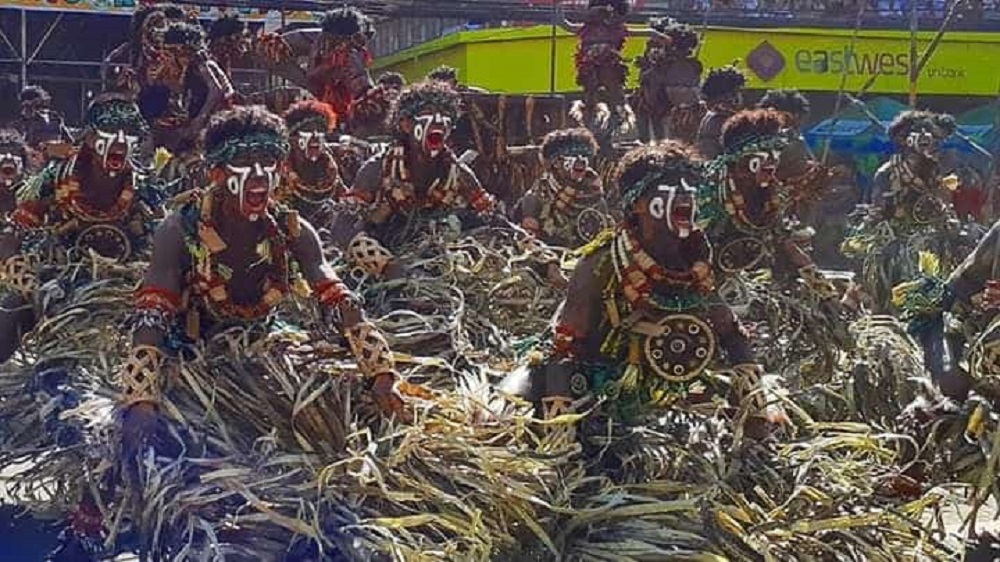 Iloilo Dinagyang Festival: the Ilonggo cityscape, the deafening sound of drums, the cajoling of street dancers, and the deluge of people from different countries around the globe, all as one to celebrate Señor Santo Niño, the child Jesus.

The sought-after Iloilo Dinagyang Festival is held every fourth of January every year. It commemorates the arrival of Malay settlers and the barter of Panay Island from the Ati natives. It all began way back in 1967 with the arrival of the replica of Señor Santo Niño, the child saint, from Cebu at the San Jose Parish in Iloilo. Back then, the festival was merely Iloilo Ati-Atihan resembling the other Ati festivals in nearby provinces. The term ‘Dinagyang’ was first coined by Ilonggo broadcaster Pacifico Sudario, which means ‘merrymaking’.

In a bid to make the festival unique, the name was made official. Also, to promote local tourism, the tribal competition was put into play through the effort of the local government and the Ministry of Tourism.

Fifty years later. The Iloilo Dinagyang Festival is now a much-awaited, world-class event joined by locals and tourists from around the world. Over the years, the festival flourished. It gained an international following through tribe performances expressed through music and dance.

The festival also contributed to the economic, not to mention tourism, development of the city by pooling tourists and producing entrepreneurial opportunities for locals. Moreover, tribe members were also given the opportunity to perform internationally – in Hong Kong, Singapore, and Japan, to mention a few. Selected tribe members are even flown every year to participate in the annual Philippine Independence Day in the United States.

Iloilo Dinagyang Festival is also a frequent winner in the annual Aliwan Fiesta. Dubbed as ‘The Metro Manila of All Fiestas’, Aliwan Fiesta is organized by Manila Broadcasting Company (MBC) together with the Cultural Center of the Philippines with prizes amounting to Php 3,000,000. Dinagyang was champion from 2010 to 2013, and 2017. As of date, the festival is a strong contender in Aliwan.

The festival not only highlights the tribal competition but also puts a spotlight on a number of events – liturgical celebrations, fluvial procession, a parade of lights, pageantry, and more. The Kasadyahan Festival preludes the tribe competition and is participated by different municipalities. On Dinagyang’s 50th year last 2018, Kasadyahan was upgraded to Fiesta Filipinas and invited by the Department of Tourism to compete and present provincial and municipal festival performances.

Miss Iloilo Dinagyang is also an addition to Dinagyang’s roster of events – not to mention the parade of brands that sponsor more events along Diversion Road or in the city. Last 2018, the festival’s 50th year, Sarabia Jewelry signed as the official jeweler of Miss Dinagyang, and the pageant was endowed with an official crown.

To further narrate the journey of the festival, the historic Iloilo Freedom Grandstand was taken down after its last Flag Raising Ceremony, February 5, 2018. It was relocated along Muelle Loney Street facing the historic Iloilo River to pave the way for the redevelopment of Sunburst Park.

The new grandstand is named ‘Dinagyang Grandstand’, and later reverted to ‘Iloilo Freedom Grandstand’ and was blessed January 11, 2019 – in accordance with the Iloilo Dinagyang Festival Opening Salvo. Sunburst Park, where the former grandstand stood, was turned over by the Tourism Infrastructure Enterprise Zone Authority.

For the second year in a row, the sought-after Iloilo Dinagyang Festival is a go but will be compliant with health and safety protocols. Iloilo City Mayor Jerry Treňas, in a social media post, reveals that despite being in the midst of a pandemic surge, the local government, the San Jose Parish, and the Iloilo Festivals Foundation Inc., decided to push through with the celebration, virtually.

His statement: “While we are in the midst of a surge of cases, the City Government, together with our partners, the San Jose Parish, and the Iloilo Festivals Foundation Inc. decided to go on with our celebration in honor of our patron saint, Seňor Sto. Niňo to ask for his intercession for Iloilo City and its residents.”

Treňas assures that all recordings were done prior to the surge of cases in January.

“All recorded Dinagyang tribe activities were done in December and with strict observance of health protocols. Let us all ask for the intercession of Seňor Sto. Niňo for our affected Ilonggo brothers and sisters during these most difficult times. Viva Seňor Sto. Niňo!”says Mayor Treňas.

Unveiling of Murals and Culminating Ceremonies

The sought-after Iloilo Dinagyang Festival is a go but will be compliant with health and safety protocols. Moreover, the event itself will be made digital. Prior to the decision, a consultative meeting was held with stakeholders and it was made apparent that there will be no mass gatherings, thus the move to go digital. Dinagyang 2021, the first-ever digital Dinagyang, is themed “One Dinagyang. One Iloilo. Halad kay Señor Santo Niño”. 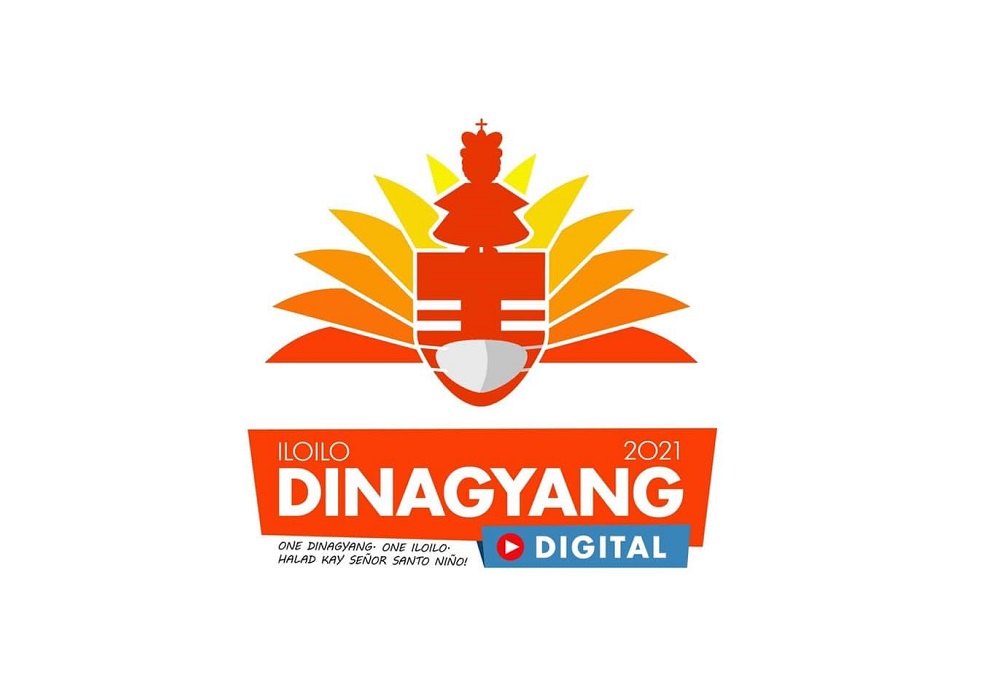 The 2021 celebration is geared to help festival artists especially the Iloilo Artists Festivals Association (IAFA) group of festival performers, choreographers, designers, as well as other live artists that were badly affected by the pandemic. Virtual event highlights include the following:

According to Prof. Eric Divinagracia, Chair of the Digital Production Team, the 360 degrees concept will be approached in a different way: digital/shot in film; 360 degrees view, different angles; global – as the performances can be seen all over the world; putting the districts at the forefront, highlighting city landmarks.

The Iloilo Festivals Foundation Inc, to further thrust the city’s ‘level up’ promise, will highlight a 360° performance or an ‘arena’ type of performance. Consistent competing tribes include the following:

The digital production will showcase the landmarks of Iloilo and the Panay Bukidnon story. Award-winning video production team Mayad Studios will be the official video editor. Moreover, the Iloilo Festivals Foundation Inc. assured the public that the performers were placed in a bubble with swab tests prior to practices and observed health and safety protocols prescribed by the government. 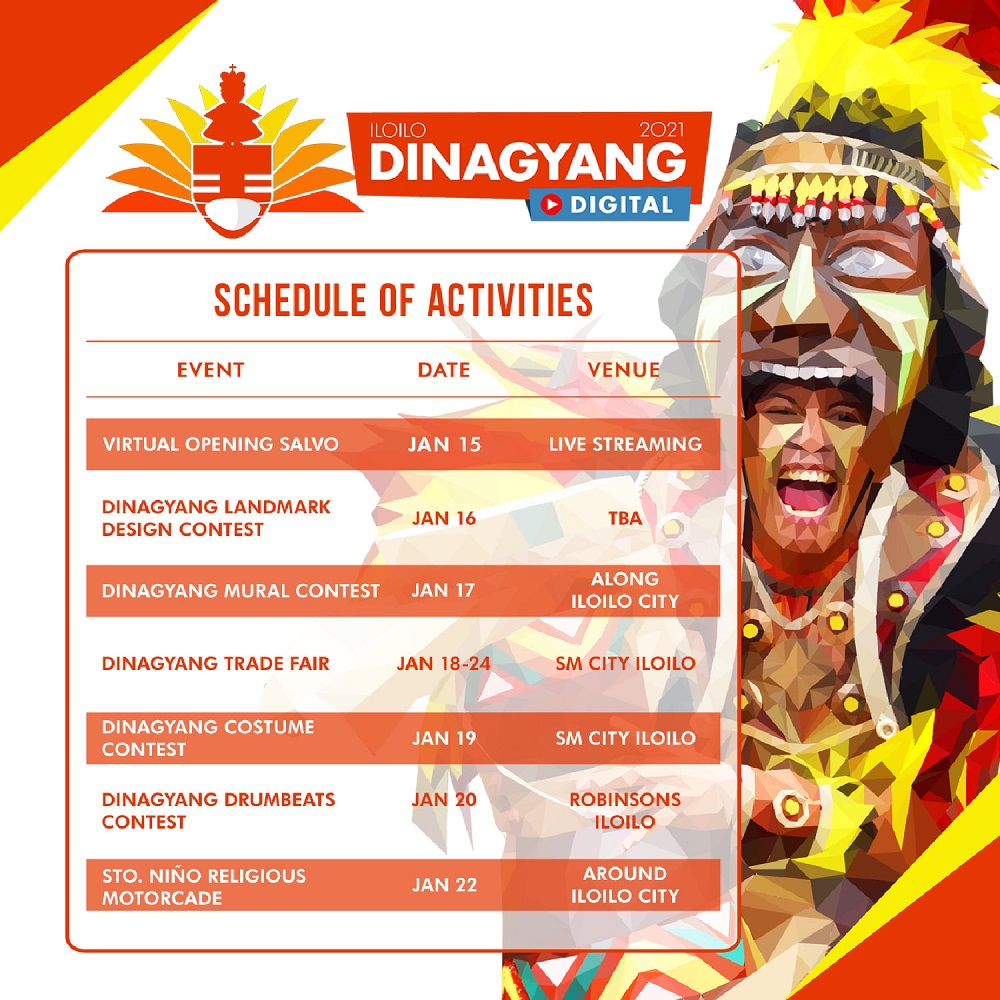 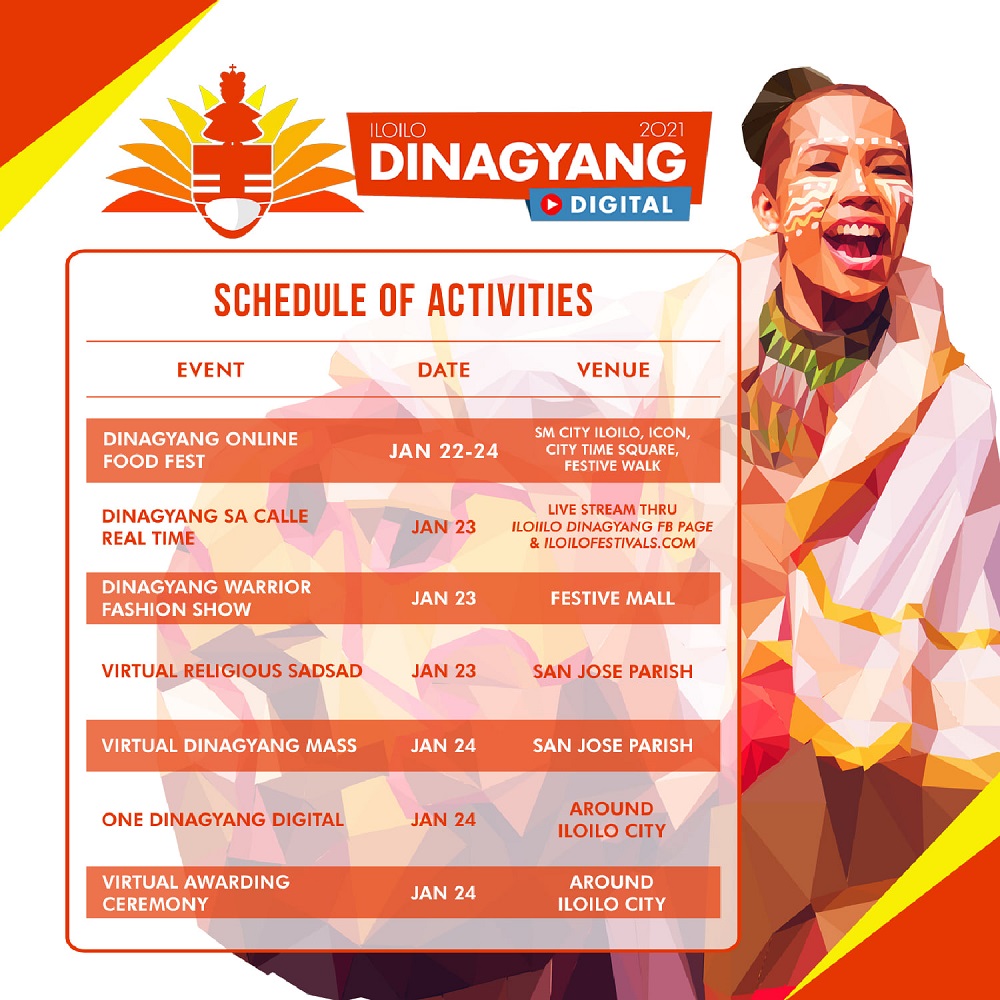 Furthermore, according to Gab Umadhay, Vice Chairman of the Dinagyang 2021 Steering Committee, although mass gatherings are not allowed, there will be some economic activities like trade fairs, food fests, and the like. As a safety measure, compliance teams will be deployed in the venues.

Pinta sa Kapiestahan. The Pinta sa Kapiestahan, an initiative by the Iloilo Festivals Foundation Inc., is the 1st Dinagyang Mural Painting Competition with activities set to happen from January 10 to 17, 2021. The competition is open to any interested group – each will be representing one of the seven districts of Iloilo City. The event will be held at the Atria Park District in Iloilo City.