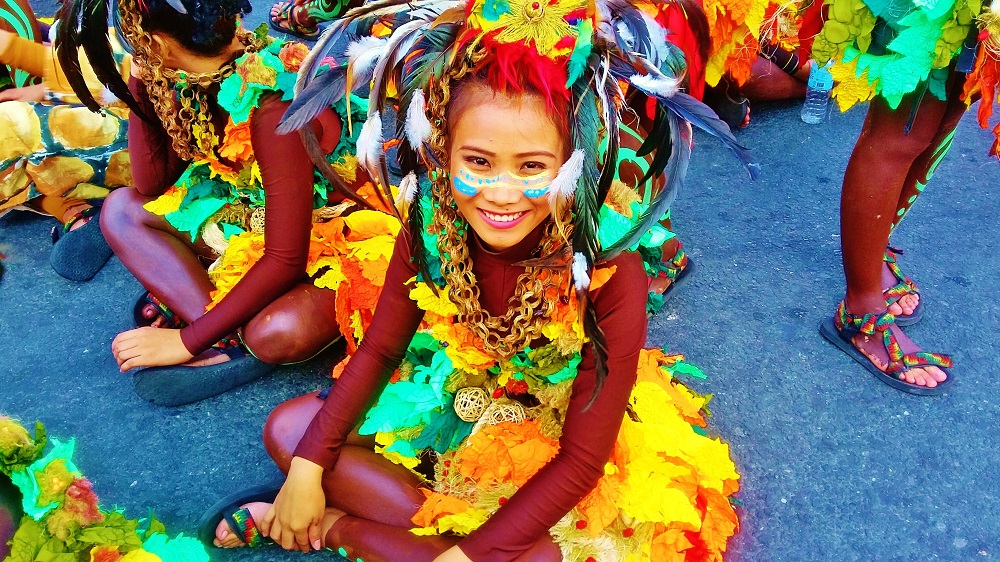 The Ilonggo cityscape, the deafening sound of drums, the cajoling of street dancers, and the deluge of people from different areas of the planet, all as one to celebrate Señor Santo Niño, the child Jesus. The sought-after loilo Dinagyang Festival is held every fourth of January every year. It commemorates the arrival of Malay settlers and the barter of Panay Island from the Ati natives.

It all began way back 1967 with the arrival of the replica of Señor Santo Niño, the child saint, from Cebu at the San Jose Parish in Iloilo. Back then, the festival was merely Iloilo Ati-Atihan resembling the other Ati festivals in nearby provinces. The term ‘dinagyang’ was first coined by Ilonggo broadcaster Pacifico Sudario, which means ‘merrymaking’. In abid to make the festival unique, the name was made official. Also, to promote local tourism, the tribal competition was put into play through the effort of the local government and the Ministry of Tourism.

Fifty years later. The Iloilo Dinagyang Festival is now a much-awaited, world-class event joined by locals and tourists from around the world. Over the years, the festival flourished. It gained international following through tribe performances expressed through music and dance. The festival also contributed to the economic, not to mention tourism, development of the city by pooling tourists and producing entrepreneurial opportunities to locals. Moreover, tribe members were also given the opportunity to perform internationally – in Hong Kong, Singapore, and Japan, to mention a few. Selected tribe members are even flown every year to participate in the annual Philippine Independence Day in the United States.

Iloilo Dinagyang Festival is also frequent winner in the annual Aliwan Fiesta. Dubbed as ‘The Metro Manila of All Fiestas’, Aliwan Fiesta is organized by Manila Broadcasting Company (MBC) together with the Cultural Center of the Philippines with prizes amounting to Php 3,000,000. Dinagyang was champion from 2010 to 2013, and 2017. As of date, the festival is a strong contender in Aliwan.

The festival not only highlights the tribal competition but also pust a spotlight on a number of events – liturgical celebrations, fluvial procession, parade of lights, pageantry, and more. The Kasadyahan Festival preludes the tribe competition and is participated by different municipalities. On Dinagyang’s 50th year last 2018, Kasadyahan was upgraded to Fiesta Filipinas and invited by the Department of Tourism to compete and present provincial and municipal festival performances. Miss Iloilo Dinagyang is also an addition to Dinagyang’s roster of events – not to mention the parade of brands that sponsor more events along Diversion Road or in the city. Last 2018, the festival’s 50th year, Sarabia Jewelry signed as official jeweler of Miss Dinagyang and the pageant was endowed with an official crown.

To further narrate the journey of the festival, the historic Iloilo Freedom Grandstand was taken down after its last Flag Raising Ceremony, February 5, 2018. It was relocated along Muelle Loney Street facing the historic Iloilo River to pave way to the redevelopment of Sunburst Park. The new grandstand is named ‘Dinagyang Grandstand’, and later reverted to ‘Iloilo Freedom Grandstand’ and was blessed January 11, 2019 – in accordance with the Iloilo Dinagyang Festival Opening Salvo. Sunburst Park, where the former grandstand stood, was turned over by the Tourism Infrastructure Enterprise Zone Authority. 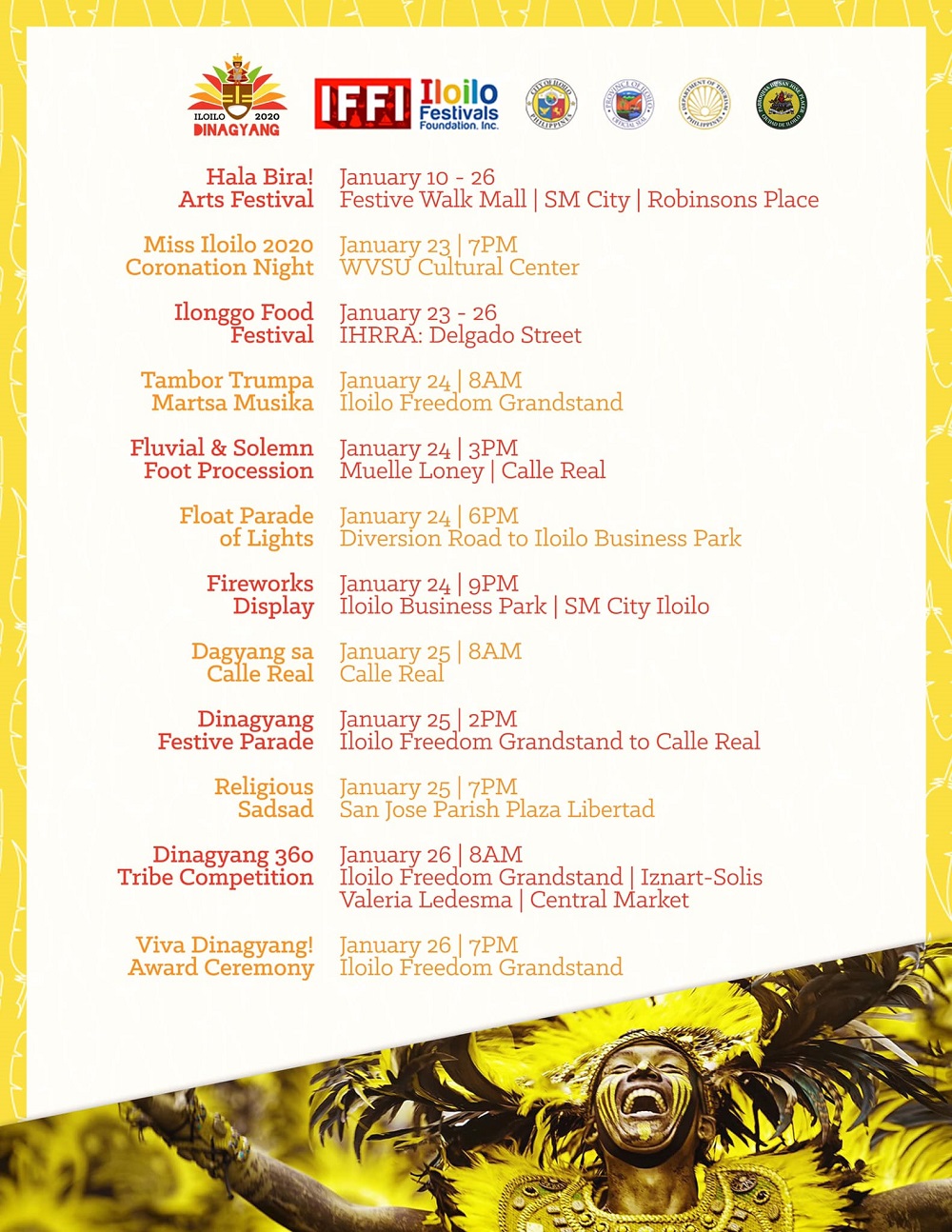 In a press conference recently held at the Media Lounge of the Iloilo City Hall, Committee Chair Allan Ryan Tan revealed that the targeted release date for tickets will be on December 09, tentatively. Tickets will then be available for purchase only at the Department of Tourism accredited establishments – at accredited hotels, accredited tour operators, at the Iloilo City Hall, and at the Iloilo Festivals Foundation Inc. Tickets ranges from Php 1,500 to Php 2,200 and only 3,600 tickets are available for purchase.

-> List of Events during Dinagyang in the City of Love <-

The Iloilo Dinagyang 2020 will be accommodating Dinagyang food kiosks in the City of Love. Furthermore, the committee has released guidelines for those interested to avail a kiosk for business purposes. Target date and issuance of kiosk number and receiving of reservation form will be on November 29, 2019 2pm to 6pm at the SM City Cyberzone; releasing of kiosk will be in a first come first serve basis. No reservations will be accommodated.

Lessee must bring one valid government issued ID upon transactions – strictly one kiosk per person is allowed. Kiosk rental will include the following: a rental fee of Php 5,000; appliances will be charged as refrigerator, freezer, microwave oven, deep freezer at Php 300; rice cooker, blender, water dispenser, electric fan at Php 250; oven toaster, video, tv at Php 100; AM-FM radio at Php 75.

Payments shall be settled at a bank duly designated by the Iloilo Festivals Foundation Inc. Receiving of deposit slips will be on December 2 to 4, 8am to 5pm at the Iloilo Festivals Foundation Inc Office located at the G/F of Ker Building, Iloilo City. Moreover, lessee must install kiosk following a uniform design to be provided by the kiosk committee. It is also the responsibility of the lessee to procure a Barangay Clearance at the Barangay where the kiosk is located and Health Certification from the City Health Office.

The Iloilo Festivals Foundation Inc recently announced the opening of events accreditation to interested applicants last October 18, 2019. The foundation included the following requirements for approval: 1. letter of intent addressed to the president of Iloilo Festivals Foundation Inc, Atty Jobert Peňaflorida, and emailed to iloilofestivals@gmail.com or submit it to the foundation’s office at the G/F of Ker Building Annex, Iloilo City; 2. letter of intent should include details and rationale of the event; 3. a minimum accreditation fee of Php 20,000 subject to the approval of the Board of Trustees. Application for accreditation will be from October 15 to December 15, respectively.

Website, blogs, or social media accounts shall be subject to verification by the committee in charge to qualify for the accreditation. Moreover, photographers should attach a screenshot of their Dinagyang related photo taken previously and posted on their social media accounts. First time photographers should attach a screenshot of their post or shared post about any Dinagyang promotional material online such as poster, photo, video, link, etc. He/she should present photographic work or samples. The Iloilo Festivals Foundation Inc. has the sole authority to extend accreditation in four judging areas: Freedom Grandstand, Iznart-Solis Street, Ledesma-Valeria Street, and Maria Clara street.

The committee will limit accreditation to only 600 registrants. Accreditation forms shall be accomplished properly with 1×1 picture, duly signed by the head of the agency/organization for media practitioners and photographers. Incomplete accreditation forms will be disapproved. A registration fee of Php 1,000 is required for all photographers, bloggers outside of Iloilo, and government documentors. Payment shall be made upon claiming of ID.

Accomplished accreditation form shall be submitted on or before December 27, 2019; 5pm. All late registrants will be charged Php 1,200. Dinagyang Ids will be released on January 22, 2020 at 2pm to 5pm and January 23, 2020 at 9am to 4pm, Penthouse of City Hall. IFFI Official Receipt will be issued.

The organizer reserves the right to determine the stage assignment of photographers and bloggers; not necessarily at the stage that they requested for in their application forms. Their registration fee will not in any way guarantee that they will be assigned to their preferred coverage area. Stage assignment is color coded to indicate access to only one (1) specific performance area. Local applicants may submit their form at the Public Information Office, 5/F Iloilo City Hall, Plaza Libertad or email dinagyang@gmail.com. For clarification, contact Public Information Office at (033)333-1111 local 515 or email dinagyang@gmail.com.