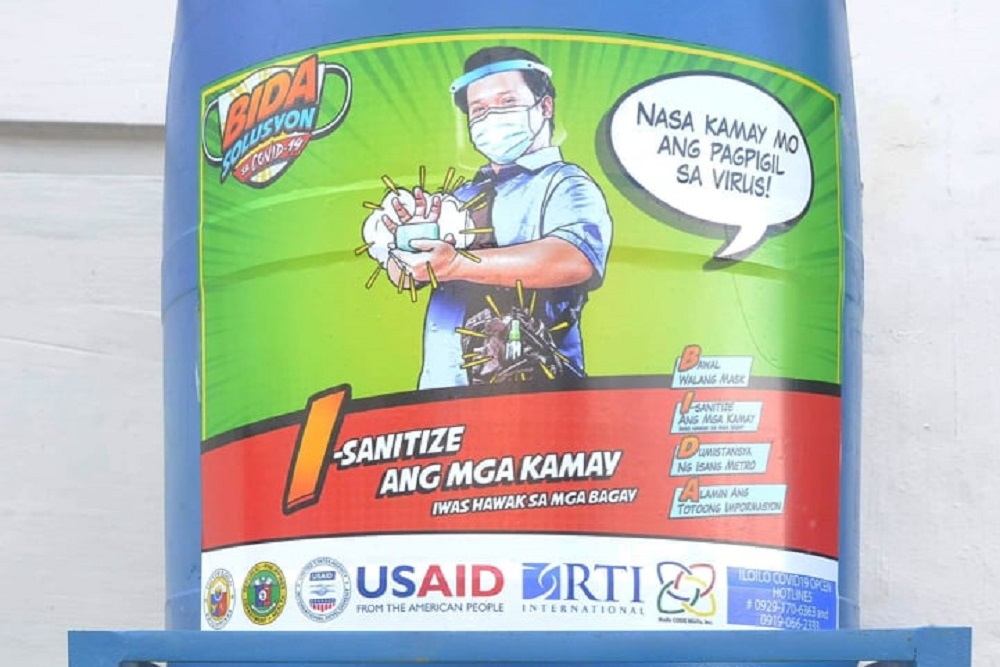 The USAID ReachHealth Project implemented in Iloilo City has turned over a total of 14 handwashing stations to various community-based beneficiaries. The handwashing facility is one of the components of a 3.5-month project, entitled: “Technical Assistance to the City of Iloilo in Various Capacity Building Interventions to Support LGU Community-Based COVID-19 Response.”

The project was carried out by the Iloilo Caucus of Development NGOs Network (Iloilo CODE-NGOs), an implementing partner of the USAID ReachHealth in Iloilo from September to December 2020. Among barangays who received a handwashing facility in the city are San Juan, Boulevard, Calumpang, Bolilao, Nabitasan, Baldoza, and Bo. Obrero.

The handwashing station is a packaged facility. It comes with a water tank, fittings, faucet, sink, and provision for a handwashing soap. It is metal framed and foot-operated to prevent hand contact and with a ready water supply and a water discharge connection.

Handwashing station turn-over. Mandurriao district public market-in-charge Beverly Loma receives the handwashing facility from a USAID ReachHealth Project facilitated by Iloilo CODE-NGOs Network in Iloilo City, December 2020. The purpose of the handwashing station is to provide an accessible handwashing service to these publicly utilized facilities to enhance health protocols and to help reduce transmission of the virus.

The short-term project is a collaborative effort that reinforced the initiatives against COVID-19 by the Dept. of Health-Region VI and the various departments of the Iloilo City Government, including the city’s chief executive Jerry P. Treñas.

As an implementing partner, Iloilo CODE-NGOs likewise gathered the support of the Family Planning Organization of the Philippines (FPOP Iloilo Chapter) and Signpost International. The major component and activities that were implemented under the USAID ReachHealth Project were the following:

Training of BHERTs on Infection Prevention and Control as well as Risk Communication and Community Engagement; training of contact tracers on Infection Prevention and Control (IPC); educational sessions for women and girls on gender-based violence, mental health, and adolescent health in partnership with the CSWD; and microplanning and workshop for Barangay Coordinated Operations to Defeat the Pandemic (CODE) with five hotspot barangays. Read: Handwashing Important in Fighting Covid-19