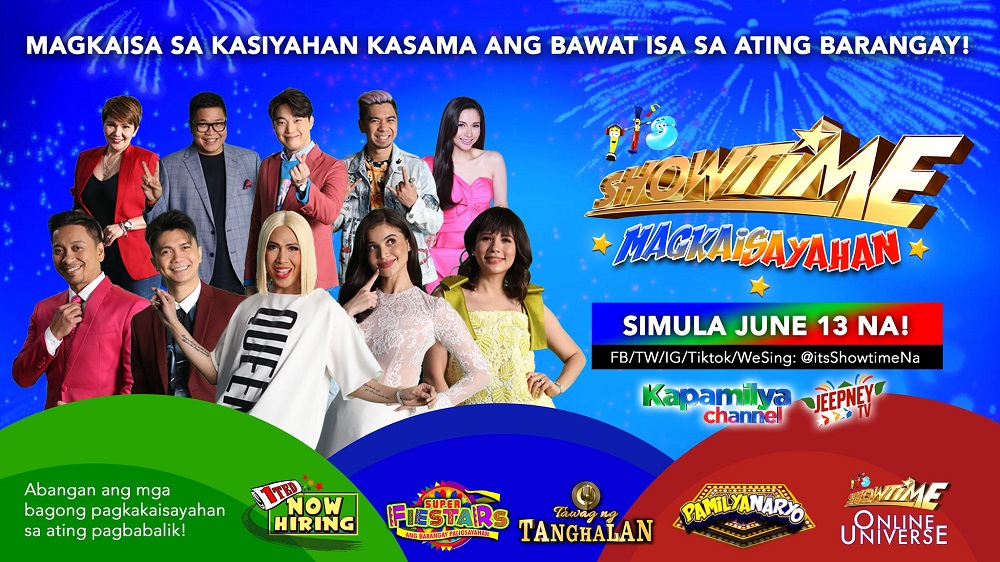 Since the shutdown of broadcasting giant ABS CBN, program ‘It’s Showtime’ finally returned to the spotlight via the Kapamilya Channel and Jeepney TV. It first show since the shutdown was aired June 13. In its new segment, hosts Vhong Navarro, Jhong Hilario, Karylle, Amy Perez, Jugs Juguetta, Teddy Corpuz, Ryan Bang, and Vice Ganda reached out to families and brought back the signature ‘It’s Showtime’ entertainment.

It’s Showtime will air on Mondays to Fridays on Jeepney TV and Kapamilya Channel (SKYcable channel 8 on SD and channel 167 on HD, Cablelink channel 8, G Sat channel 2), and most cable operators under the Philippine Cable and Telecommunications Association (PCTA) nationwide. Moreover, the Kapamilya Channel will be initially seen by cable and satellite TV users only. Read more: It’s Showtime returns to provide entertainment, as seen on the ABS CBN website.

ABS CBN Plight. Philippines’ largest media and entertainment network ABS CBN went off air after the National Telecommunication Commission ordered it to stop operations due to the expiry of its legislative franchise.
ABS CBN signed off at 7:52pm last May 05 after airing the national anthem and naming its engineers and TV stations. Included in the shutdown are five AM stations: DZMM, 18 FM stations, and 42 TV stations including Channel 2 and Channel 23.

It can be recalled that the NTC has previously committed to the House Committee on Legislative Franchises that it will provide the network a provisional authority to operate pending the grant of a franchise. It was, however, opposed by Solicitor General Jose Calida, stating that there is no law delegating the powers of Congress to approve franchises to the NTC. Calida even warned that graft charges may be imposed should the NTC commissioners push their move. While the network has ceased its operations, it can continue delivering content via its online platforms and cable news channel ANC.