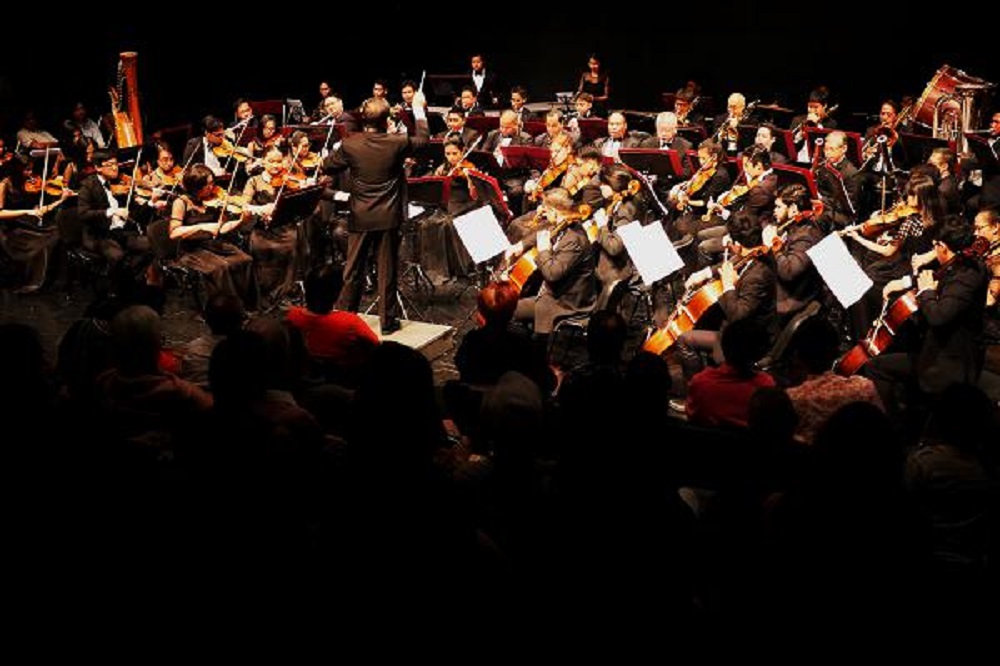 The Manila Symphony Orchestra (MSO) is on its 91st year. As Asia’s first symphony orchestra, founded in 1926 by Dr. Alexander Lippay and reorganized in 2001 by its longtime concertmaster, the late Prof. Basilio Manalo, until the present under the baton of Professor Arturo Molina, it produces a broad, year-round program that celebrates its legacy of performing the masterpieces while reaching out to new audiences across space and time. Steadfastly, it remains true to its mission “to enrich the Filipino’s vibrant cultural life through fine orchestral music and to enable more people to experience the power of music”.

The essence of each of this orchestra’s 60 musicians and staff is fueled by the interest of the Filipino listener. The theme for this year is Leadership & Creativity, and will be demonstrated in each of the five MSO’s Gala Season Concerts by means of an original composition to prelude the main works.

Leadership & Creativity are essential elements in any successful undertaking. In the orchestra, the conductor exemplifies leadership, whose interpretation of the music performed must be accepted willingly by the musicians. Creativity then lies in the work of the composer, who harnesses the energetic force of ideas and concepts yet unrealized until his ink graces the empty score.

The MSO is the proud product of the Manila Symphony Orchestra Foundation—a non-profit, private organization—whose members participate in the cultural life of the country as teachers at the MSO Music Academy in Makati and Manila, soloists, music arrangers, chamber music performers, entrepreneurs, bandmasters, and choir conductors.

Slated on August 25, 2017, the orchestra will present “Sweet Symphonies: Bach vs. Beatles” at Molo Church while the concert dubbed as “Soundtracks and Symphonies” is scheduled on August 26, 2017, at the Iloilo Convention Center. Ilonggos will have an inspiring experience of orchestral music that features soundtracks from American and Filipino hit movies.

“Iloilo was once the center of culture and the arts in the Philippines. We have started promoting our visual arts and now, we will focus on the performing arts,” according to Sen. Franklin Drilon, an Ilonggo senator who is a major catalyst in the ongoing rapid developments in the city and province.

This musical treat of international standards aims to spark the interest of the local talent pool and a move towards a grander vision for Iloilo and the Ilonggos. It collaborates with the advocacy of the MSO as a vital contributor to the appreciation and enjoyment of music by people from all walks of life. Inquiries about the upcoming concert in Iloilo may be directed to ILED office (33) 335-0333 and 337-8341. For more information about Manila Symphony Orchestra, please visit the Manila Symphony Orchestra Official Website.

About Professor Arturo Molina, Conductor: Maestro Arturo Molina’s pedigree in Philippine music is unquestionable. With family into classical, jazz, and opera, and in both fields of performance and education, the Maestro is the one of the latest in the line of professionals to uphold the heritage of national music with the Molina name.

Starting at age six under Adriano Garcia, a violist of the Manila Symphony Orchestra (MSO), he later received a scholarship from the MSO to study with Prof. Oscar Yatco, MSO’s music director at the time. During those years, the MSO’s nursery of young musicians was the University of the East Student’s Orchestra under Col. Antonino Buenaventura, where young Arturo earned his stripes.

As an adult, he trained in the elite conservatories of Moscow and Kiev, winning in the String Competitions that vaulted him into a concert at the famed Bolshoi Theater.

Upon his return in1987, Maestro Molina joined the Philippine Philharmonic Orchestra, became concertmaster of the Manila Chamber Orchestra, taught at the Philippine Research for Developing Instrumental Soloists (PREDIS), and was solo violinist with the newly formed Manila Youth Symphony Orchestra, an offshoot of PREDIS.

With the ability to convey important ideas using few, everyday words, Maestro Molina conducts with Brocka-esque effect, using imagery to convey the power of sound. “Parang tubig” (like water), “galing sa malayo, papalapit” (from afar, coming closer), “relax, suabe, malambot” (suavely, tenderly) are some of his memorable phrasings. “The violin has a gender,” the Maestro once said, “—it is a lady.” Such is his style.

In 2001, during the concert that re-launched the MSO, Billy Manalo handed the baton to Arturo Molina, entrusting to him the leadership and the future of the Philippines’ first—and one of Asia’s earliest symphony orchestras.

In the decade that passed, the Maestro’s growth as conductor and the development of the MSO under his care have created legion followers, dedicated musicians, and a heritage that will march on far beyond the 89 years of its proud musical existence.

The Manila Symphony Orchestra would like to thank its sponsors for Season 2017-2018 “Leadership & Creativity.”