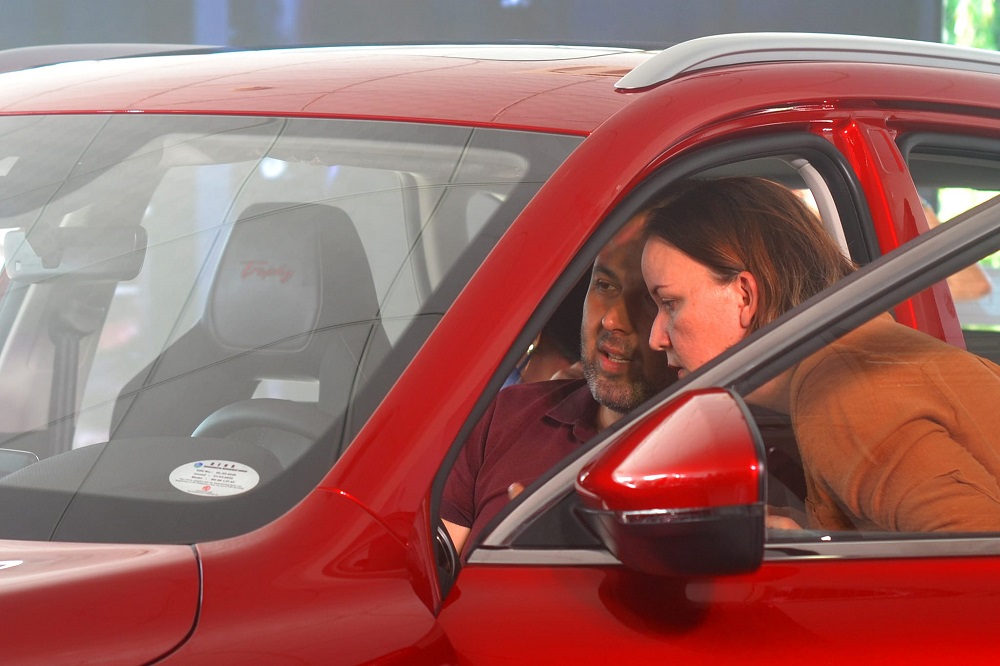 #TurbochargeYourDrive with the New MG ZST Crossover SUV. Since MG Philippines opened its doors in 2018, the ZS model line has captivated audiences with its stylish looks, modern safety and driver assists, and truly attainable price points for each variant. As MG continues to grow in relevance and strengthen its value proposition among local car buyers, the brand’s ZS Crossover SUV remains a perennial crowd favorite, currently at the top of the 5-seater SUV-B segment in the Philippines. Related: MG Philippines Highlights MG HS SUV

“When we launched the MG brand in 2018, our goal was clear: to be part of the exciting and growing Philippine automotive market, and to provide Filipinos with stylish, modern, and safe vehicles – but at very attainable price points,” says Atty. Alberto B. Arcilla, President and CEO of MG Philippines.

He continues: “The local market’s reception has been very encouraging indeed. In just three years, more Filipinos have chosen MG, and there are now over ten thousand MG’s on our roads, with several of those being the ever-popular ZS Crossover SUV.”

In Q4 2021, the ZS model lineup gains a new stablemate in the new, top-spec variant ZST: a fresh take on a crowd favorite, which sports MG’s updated global design language. The ZST joins the existing roster of ZS models currently available from MG Philippines, namely the Alpha AT, Style AT, and Core MT variants. “With the new ZST by MG, what customers get is an upgrade of all the best features of the original ZS, headlined by a responsive turbocharged engine that provides power on tap when you need that extra boost on the road,” says Atty. Arcilla.

The “T” in ZST stands for “Turbo;” a literal representation of the crossover’s punchy turbocharged, three-cylinder, 1.3-liter engine capable of producing 160 HP and 230 Nm of torque. And with a new 6-speed automatic transmission with manual sports mode, drivers will enjoy smooth, efficient delivery of power to the wheels.

The “T” also stands for “Trophy”, as the ZST is the highest-spec variant of the popular crossover SUV line. Similarly, “T” connotes a turbocharged experience for the ZST in its entirety. With its numerous upgrades and host of driver and safety assists usually found in more premium segments, the ZST is primed to boost your overall driving experience.

Aside from the updated engine and powertrain, changes on the ZST are more visibly apparent to the naked eye: A new, Obsidian Matrix grilled and full LED projector headlights give the ZST an athletic countenance while its 17-inch, two-tone “Tomahawk” wheels wrapped in wide, low profile tires, and red brake calipers give the car a sporty stance. Gloss black exterior door panel accents, a widened front air dam, and reimagined body lines convey speed and power. With these, among other features, the ZST conveys a presence that is both striking and impressive; but still very approachable, and youthful in spirit.

Premium to the Touch

Inside, the ZST is a treat to the sense. Carefully placed soft-touch surfaces on the steering wheel, dashboard, center console, door panels, and other high-contact areas adds a premium touch. To add a splash of color, fine red stitching on the seats and trim, and red embroidered MG monograms on the driver and front passenger headrests pop just right, keeping the interiors looking fresh. Improved noise vibration and harshness (NVH) endures that cabin noise is kept to a minimum, and can further be appreciated alongside the ZST’s dynamic six-speaker system and 10.1-inch non-reflective touchscreen HD infotainment system. Easily mirror your smartphone via either Apple Carplay or Android Auto, so you can be sure that your maps and other visuals will be easily visible and free from glare. You can also monitor the ZST’s running stats with the vents for rear passengers, multiple storage compartments, and a dedicated USB port behind the rearview mirror for neater dashcam installations.

The MG ZST is also equipped with a host of passive and active safety features. Front, side, and curtain airbags are standard equipment for the ZST. Likewise, electronic safeguards such as Rear Cross-Traffic Assist, Lane Change Assist, and Cornering Lamps (built into the fog lamps) are new features of the ZST. The car is also equipped with Hill Hold Control, Cornering Brake Control, Traction Control, and Vehicle Dynamic Control to name a few. The ZST is also outfitted with a Blind Spot Information System paired with the car’s intelligent 360-degree vehicle view, which gives you a bird’s eye view of the car during slow-moving traffic or when slowly moving into tight parking spaces.

The ZST’s high-value proposition is further supplemented by MG Philippines’ premium aftersales offers and services. These include a 5-year or 100,000 km warranty (whichever comes first), and a 1-year free periodic maintenance service (PMS) to set your mind at ease. MG owners can download the My MG mobile app which allows them to easily schedule vehicle service appointments from the convenience of their smartphones. They can also use the app to book a visit from a Mobile Garage service caravan that provides MG owners with vehicle home service for major technical issues. The MG Hero Services, on the other hand, provides 24/7 roadside support through the MG Philippines hotline (+632 5328 4664).

The ZST will be made available in all 39 MG Philippines dealerships nationwide, and MG dealerships will be accepting reservations starting October 2021. Reservations may also be made online at BuyAnMG.com.