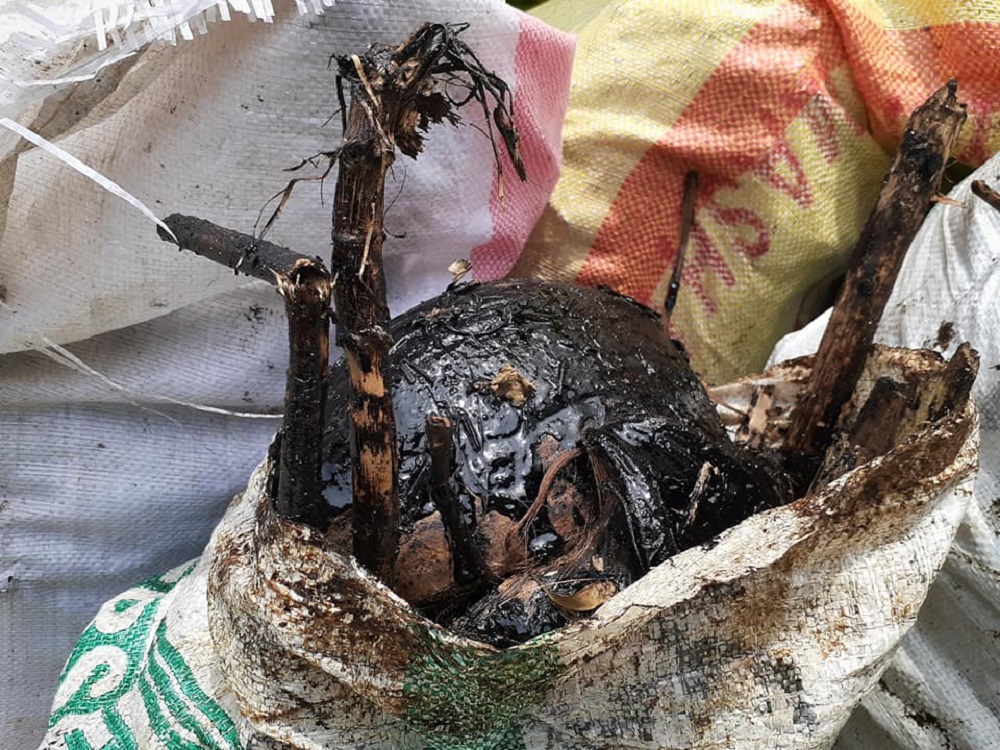 2020 Oil Spill: ‘To err is human’. Oil Spills have frequented the seas for as long as man can remember. The Kuwaiti Oil Fires in 1991 spilled 136,000 tons of crude oil into the sea, the Gulf War Oil Spill in 1991 almost 1,000 tons, and the Deepwater Horizon in 2010 almost 590 tons – these are just some of the worst oil spills in history. Mostly marine oil spills, it is defined as the ‘release of liquid petroleum hydrocarbon into the environment, especially to the marine ecosystem’.

In the country, specifically in the region, the Guimaras Oil Spill in 2006 was considered as the worst oil spill ever recorded. Oil Tanker MT Solar 1 sank off the coast of Guimaras and Negros Islands and released more than two million liters of bunker fuel – around 500,000 liters of oil – into the gulf. The incident caused grave ramifications – not only to the livelihood of nearby residents but also to the marine sanctuaries and reserves that sheltered a variety of flora and fauna.

The most recent oil spill happened in Iloilo last July 03, around 48,000 liters of oil infected Iloilo waters after an explosion happened at a local power barge – Power Barge 102, owned by AC Energy Corporation located in Zone 03 Brgy. Obrero, Lapuz. According to authorities, around 1,200 square meters were affected by the incident. No casualties were reported but families were evacuated from nearby areas due to the fumes.

An abomination to nature

One of the government agencies that responded is the Department of Environment and Natural Resources – Environment Management Bureau (DENR-EMB) in Western Visayas. The agency took water samples to assess the oil and grease concentrations off the coast of Iloilo City. Moreover, independent global campaigning organization Greenpeace released a statement, the initiative was headed by Khevin Yu, a campaigner for Greenpeace Philippines.

“This oil spill is a big threat to marine life and to the health and livelihoods of communities in Iloilo and Guimaras,” states Yu, “this oil spill will have lasting effects on the marine environment and communities,” he adds.

Moreover, an article by Eco-Business details the lasting effects of the oil spill to the environment. In the article, it stated that bunker fuel can damage mangroves by coating the trees and blocking its respiration. Iloilo and Guimaras have been long reliant to salt-tolerant trees and shrubs to protect areas from typhoons – without such trees, the locality is defenseless. The article also details how the last oil spill (Guimaras oil spill in 2006) destroyed around 1,000 hectares of mangrove forests, including the Taclong Island Sanctuary that serves as a breeding ground for fishes and different species. 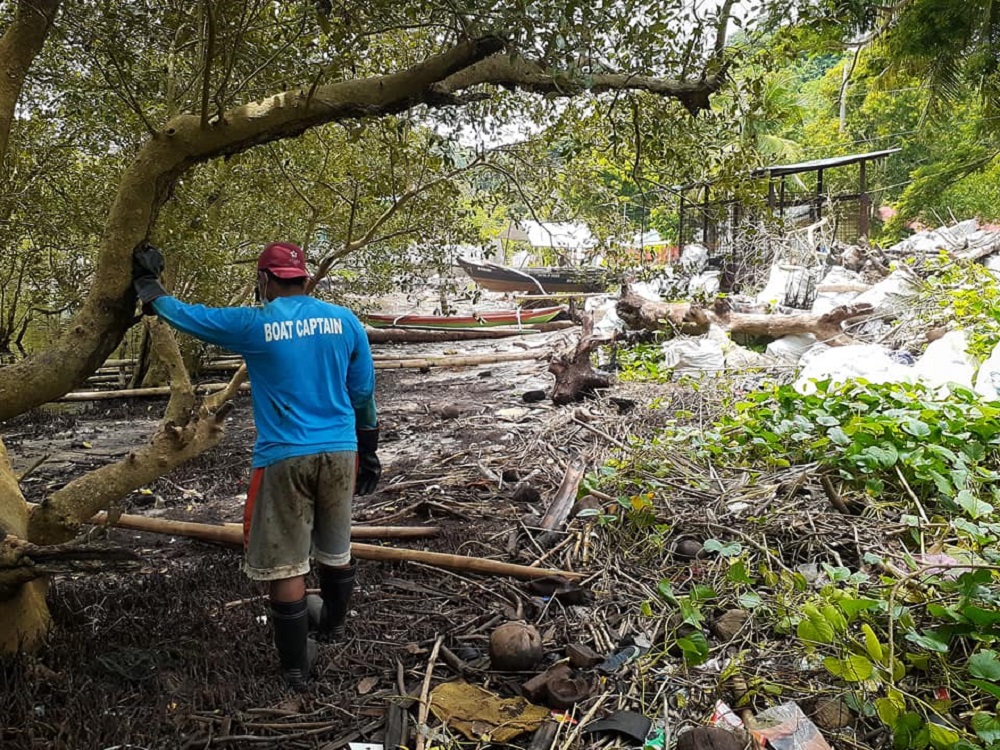 Livelihoods Lost. Here, a former boat captain reminisces his glory days when the motor banca industry was thriving – then came the pandemic, and then the oil spill. Fishing, his last resort to feed his family, was cut short due to the oil mishap. He now temporarily works for AC Energy, as a volunteer to help in the cleanup efforts to rehabilitate his barangay, one of the hardest-hit communities of the oil spill. Company AC Energy – in a bid to aid the community in recovering from the loss of their livelihood – employed members of the barangay to aid in the cleanup. As of date, cleanup efforts are still ongoing. With this, Arturo was given an opportunity to earn while helping his barangay

Apart from government initiatives, AC Energy Corporation took the lead in the containment, cleanup, and rehabilitation of the oil spill. The oil spill was contained by 10pm after its explosion around 3pm – this is due to the quick deployment of 170 personnel who worked together with other authorities in the field.

“Further to the initial assessment of the accident involving Power Barge 102, we wish to update that the oil spill had been fully contained since Friday, July 03, at around 10:00pm. The rapid deployment of roughly 170 personnel of AC Energy Philippines, the Philippine Coast Guard (PCG), Petron Corp., and Global Business Power Corp., who sent their oil skimmers and multilayered spill booms to support the equipment of the Power Barges, facilitate the immediate clean-up effort,” excerpts from the official statement released by AC Energy.

Families (around 325 households) were evacuated and have been provided for in the entire duration of their stay. The company also engaged the services of Harbor Star, a maritime service provider, to aid in the cleanup of both coastal shores and offshore areas. Another third-party engagement involves marine scientist consultants of AECOM tasked to conduct investigation, assessments, create trajectory models, and form an environment impact study detailing the effects of the recent oil spill.

With collaborative efforts spearheaded by AC Energy, shoreline cleanup activities were organized involving 900 volunteers from different barangays who have heeded the call to help. Plant Operations Head Gabby Mejia, together with his team, continues to coordinate efforts with the local government of both Iloilo and Guimaras to manage the effects of the oil spill.

To date, AC Energy have completed the recovery of oil totaling to 261,637 liters representing 95% of the spill whereas the remaining 5% is said to have evaporated or carried to the shore. The recovery was completed 8 days after the oil spill incident. Shoreline cleanup is still ongoing and is around 50% to 90% in the completion. On land cleanup has progressed and evacuated families have gradually returned to their homes. 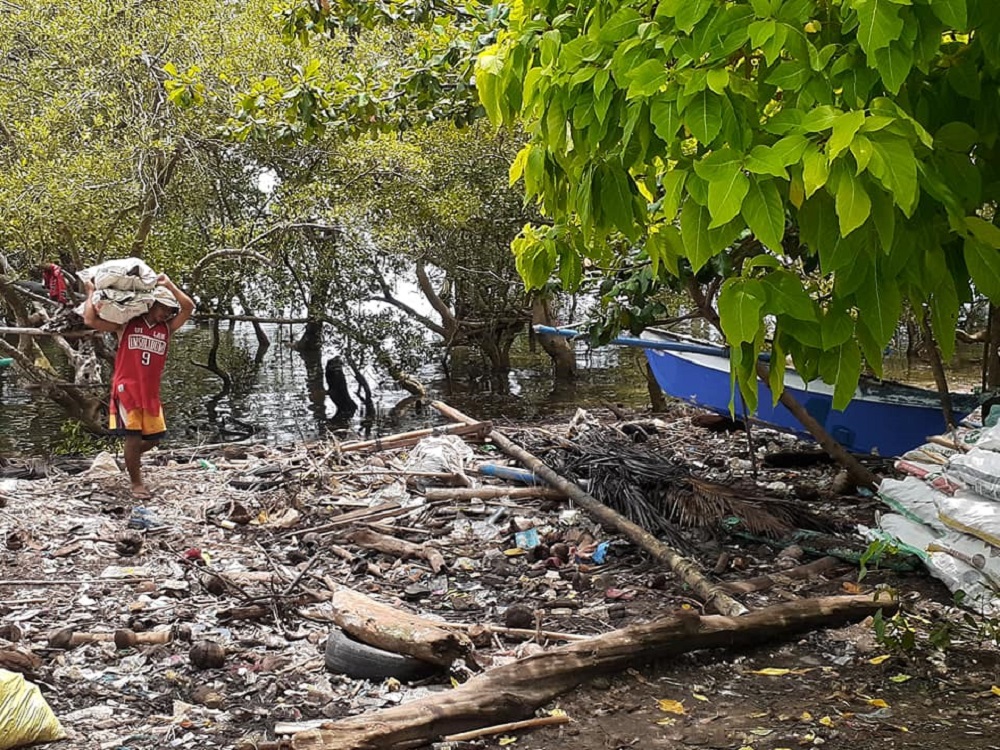 Longer Rehabilitation for Mangroves. According to AC Energy, around 89 hectares of mangroves have been affected. However, the company vows to engage in long term rehabilitative efforts to restore mangroves to its former state. AC Energy is working hand-in-hand with the DENR along with mangrove experts on treatment and rehabilitation of affected areas.

Livelihoods Lost. Here, a former boat captain reminisces his glory days when the motor banca industry was thriving – then came the pandemic, and then the oil spill. Fishing, his last resort to feed his family, was cut short due to the oil mishap. He now temporarily works for AC Energy, as a volunteer to help in the cleanup efforts to rehabilitate his barangay, one of the hardest-hit communities of the oil spill. Company AC Energy – in a bid to aid the community in recovering from the loss of their livelihood – employed members of the barangay to aid in the cleanup. As of date, cleanup efforts are still ongoing. With this, Arturo was given an opportunity to earn while helping his barangay.

Kap Kaiser Monreal, Brgy. Captain of Brgy. Hoskyn in Jordan, Guimaras. Hoskyn’s father-figure, Kap Kaiser leads community efforts in clearing the mangroves, beachlines, and coastlines with the help of AC Energy. Kap Kaiser is thankful for AC Energy’s consistent support. It may be recalled that the Ayala company has employed locals to participate in the cleanup – not only to rehabilitate oil spill hit areas but also to provide income to affected individuals and families.

Here, on a positive note, we feature Brgy. Sawang in Buenavista, Guimaras where cleanup efforts are almost complete. In the video, the coastal area looks like it has been restored to its former state.

We thank Hoskyn Brgy. Tanod and cleanup volunteer Arturo Ganila Jr. (first episode), Hoskyn Brgy. Captain Kaiser Monreal (second episode), and Sawang’s Brgy. Captain Regidor Camarista and Brgy. Secretary Jhowie Espano (last episode) who all have willingly shared their stories. We are grateful to have heard their stories of hope, their efforts to protect their lands and seas, their plight to provide refuge and sustenance to their communities, and their strong belief that, in time, all will be well.