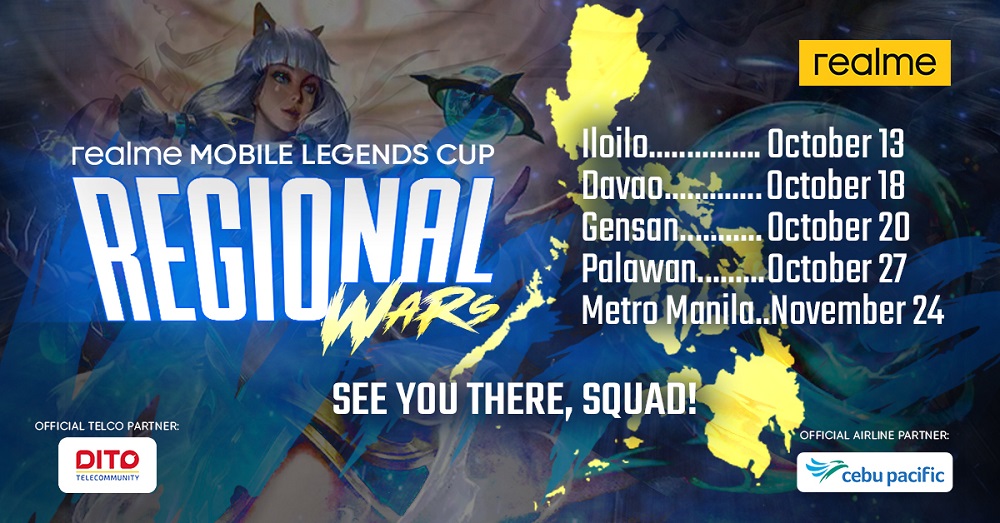 Save the dates for the upcoming Realme RMC Regional Wars: Support your cities as RMC Regional Wars continue to roll out in the next key cities. Witness the battle in Iloilo on October 13, where fans can anticipate the attendance of esport host Sonah and caster Santie on-ground. Meanwhile, casters Chantelle and OSX will be joining as well via live stream.

The Realme Squad can also catch the battle in Davao on October 18, where fans will get the chance to have a meet and greet with gaming personality, Bulldog. Fan-favorite casters Chantelle and OSX will also cast the games to viewers on-ground.

Following this regional leg will be a visit to Gensan on October 20 and to make it more exciting, stars in the gaming scene such as ChooxTV and Ghostwrecker will be there to meet the RMC Squad. Last but not the least, the Realme RMC Regional Wars semi-finals will commence in Palawan this coming October 27.

Get ready to block off the calendars for November 24 as all the region winners will go head-to-head in the grand final match to be hosted in Metro Manila. The winning team will be taking home a grand prize worth P200,000.
Who will be the first-ever RMC Regional Wars Champion? Tune in to an exclusive live stream of the events on Realme’s official Facebook page and official TikTok page. Be sure to follow the Realme PH Facebook page at http://facebook.com/realmePhilippines for more updates about the RMC Regional Wars. RMC Regional Wars is also co-presented with Realme’s official airline partner Cebu Pacific and official telco partner DITO Telecommunity.