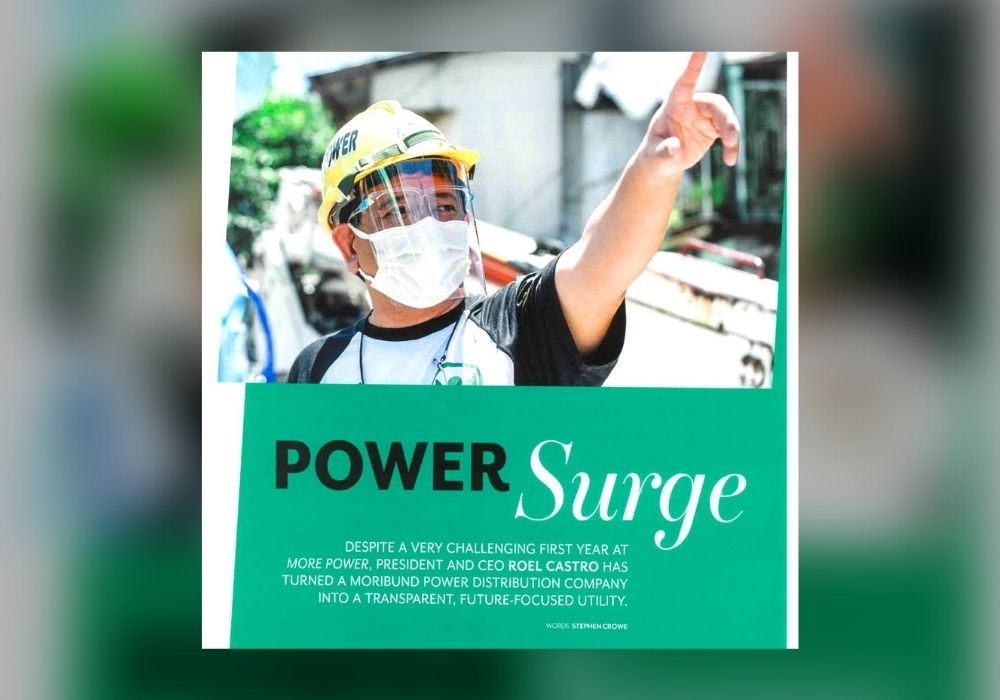 Roel Castro did not aspire to become a household name in the business community in the economically booming city of Iloilo. He is an action-oriented executive who prefers to work behind the scenes and away from the public eye. Publicity, however, is invasive for this corporate leader. Through More Electric and Power Corporation (MORE Power), Castro found himself catapulted at the controversial frontline because of a mission to carry out desirable reforms for Iloilo City’s power distribution sector.

Hence, inescapably, the name Roel Castro had become a byname in the Iloilo power and business community albeit the commendations, pent-up criticisms from electricity end-users, legal battle, and the social tensions that go with the job. Fortunately, he is a person who is focused on the goal at hand and his eyes are set on delivering positive results. The modernization of the power distribution service which he led in such a short period of time is unprecedented, to say the least.

Power industry executives both within the government and in the private sector have found their heads nodding although still in disbelief after witnessing the preliminary accomplishments from an ongoing modernization effort in the midst of a challenging global health crisis.

One power sector executive in the Visayas enthused then that “only an experienced person like Roel Castro can make it happen for Iloilo City.” The official was precisely right, judging at the rate of how things are going at the economic center of Panay Island. Indeed, Castro reawakened Iloilo City from decades of slumber induced by a defeated arrogant monopoly. He started the rhythm for local power distribution modernization by setting up a competent team of people who can execute the P1.7 billion modernization project.

Two years after MORE Power secured a franchise and with only one year in operations, the project has been crystallized by intensive rehabilitation of service amenities, the establishment of new power facilities, and application of cutting-edge technology, to turn around a historically destitute power service into one befitting a modern city within the principles of quality standard, consumer-centered, efficient, and at a reasonable cost.

A competent executive in the power industry cluster. Many Ilonggos have asked who is Roel Castro leading MORE Power? Some may have thought that this guy just emerged from nowhere. They’re mistaken and it goes without exception on those who paraded support behind him although they were unaware of the person’s ability from the start. Castro is considered one of the most competitive guys in the power industry cluster

He is an executive who possesses a profound understanding of the socio-legal-technical complexities which describe the country’s energy and power industry, unbundled into four major sectors: generation, transmission, retail services, and distribution. In 2017, he became the President and CEO of a publicly-listed company with interests in real estate, plantation, and agriculture as well as power utilities.

Castro exhibited his visionary leadership by providing solutions to a range of power-related problems confronted by various communities across the country through Palm Concepcion Power Corp. (PCPC), Peakpower Energy (PEAK), and Hydro Link Projects Corp. (HLPC). He built the PCPC plant to provide additional capacity to the Visayas grid by employing one of the most fuel-efficient plants in the country. Castro has likewise managed Monte Oro Resources and Energy and his grasp of the transmission sector was fulfilled by tenure in the National Grid Corporation of the Philippines (NGCP), the company that manages the country’s transmission sector from Luzon, Visayas to Mindanao.

As a competent guy in the cluster, Castro was sharpened by close to 30 years of industry engagement both at the macro and micro levels without hesitating whether the engagement entails a technical discussion, legal intervention in the courts, regulatory compliance, construction of new infrastructure, communications and media, or plainly exercising management decisions intended to uplift the lives of stakeholders.

The long years of engagement with the power sector has created a devoted space in the heart of Castro.
In a recent feature story in The CEO Magazine Asia by Stephen Crowe, Castro shared why new technology and the power industry are among his bookmarked interests.

“I see this (power sector) as an ever-growing industry. For as long as people need electricity, and people’s lifestyle(s) are more dependent on electricity for gadgets, this industry will always have a place,”Castro said in The CEO Magazine Asia published June 17, 2021. 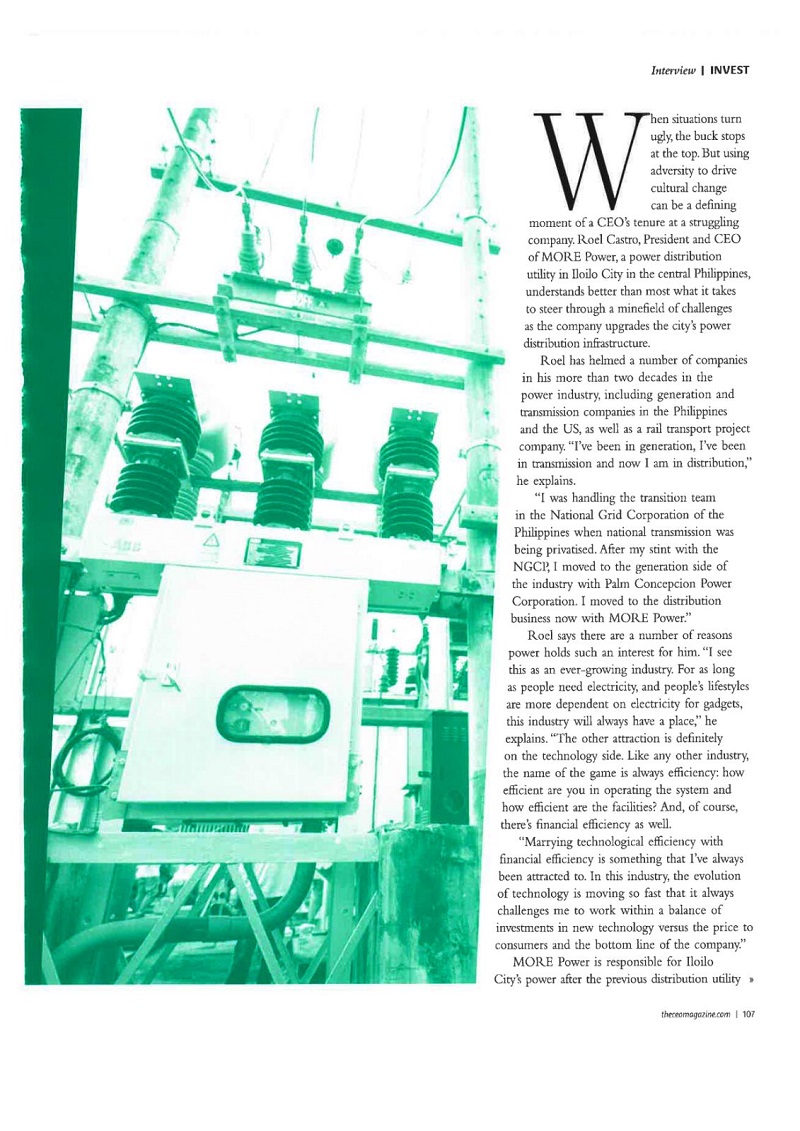 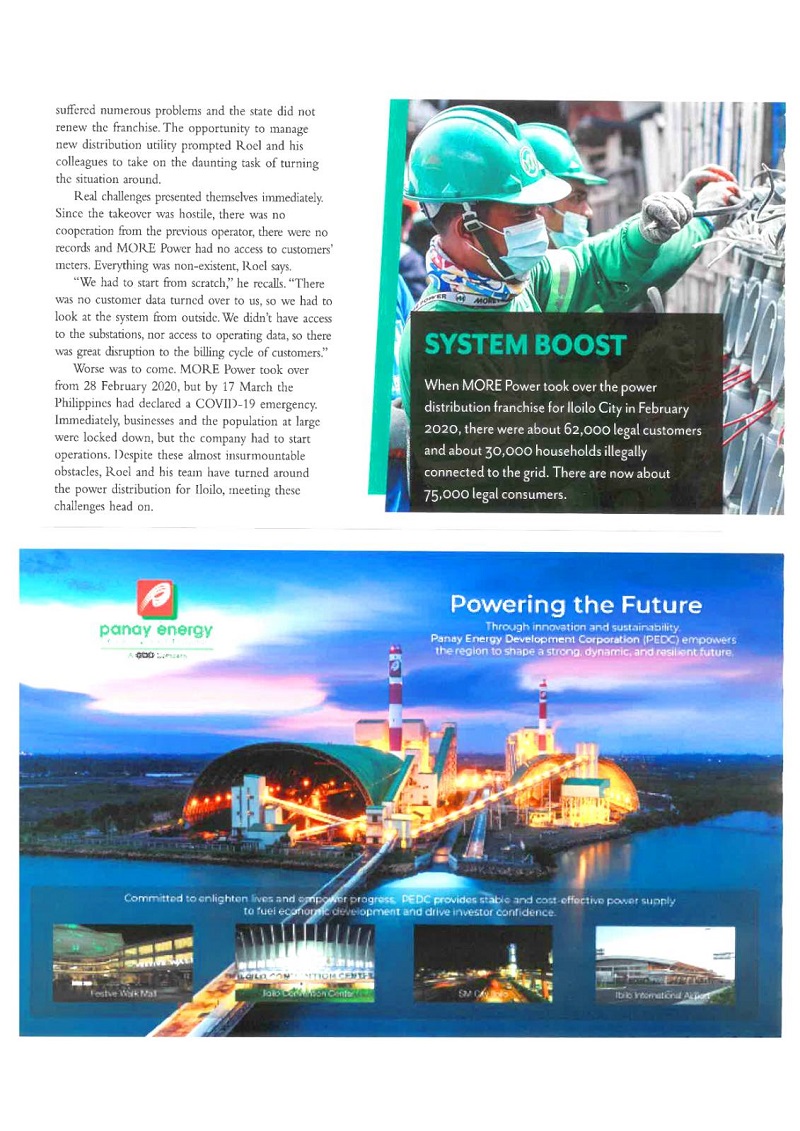 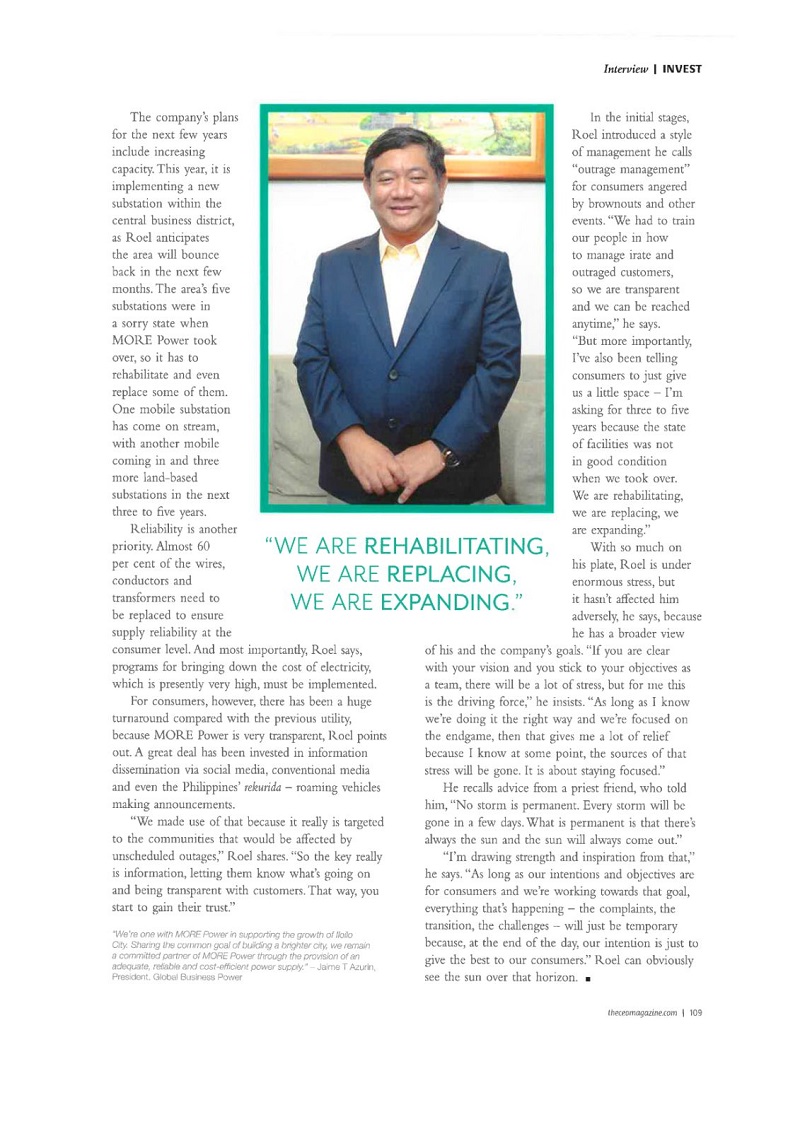 In addition, Castro declared that “efficiency is the name of the game” and he emphasized the significant role of technology for it serves as a key in attaining efficiency. These two major interests characterize Castro’s peculiar CEO instinct and he is usually inclined at conjugating “technological efficiency and financial efficiency” to realize a balanced bottom line and deliver reasonable cost to end-users of the services that the company offers.

The role that Castro now plays in the power distribution sector exemplifies a ‘completion of the power system loop’ considering that he preceded leading MORE Power as a top official in the energy, power generation, and transmission sectors. The distribution sector has its own peculiar intricacies, Castro admitted in various interviews, but he found the challenge of modernization not impossible to realize for Iloilo City.

In spite of his technocratic savvy, the guy can dress down comfortably and sit with you in places like the Iloilo Central Market fish section carinderia or by the smoky side-street barbeque in Valeria street in downtown Iloilo City.

A corporate leader who walks in the academic corridors. While Roel Castro got accustomed to posh executive lounges, skyscraper offices, and boardrooms with the powerful and influential people in megacities as a CEO, the guy is grounded by his provinciano roots.

He is an alumnus of Zamboanga City High School batch 1983. Castro’s academic discipline is honed by the natural environment and green landscape offered by the University of the Philippines Los Baños campus where he completed his Bachelor of Science in Agribusiness Management in 1987, just a year after the EDSA People Power 1 revolution that ended the Marcos dictatorship.

The Los Baños academic community developed Castro’s affinity with the natural environment; converted his consciousness for a balanced ecology into actions; and manifested in his management partiality for green sustainable technologies.

His academic experience is similar to his merit-oriented corporate climb. He earned a degree of Master in Management in 1997 from the prestigious Asian Institute of Management with commendation from the faculty. In 2017, he completed the Advanced Executive Management Program from the IESE Business School in Madrid, Spain, and the University of Asia and the Pacific. In the same year, the UPLB College of Economics and Management bestowed on Castro the honor of a Distinguished Alumnus for Corporate Planning and Governance. He was also one of the 100 Outstanding Alumni during the Centennial Program and Grand Alumni Homecoming of the College of Economics and Management (CEM) in 2019.

Last year, Roel was cited by the UPLB as an Outstanding Alumnus for Corporate Governance, one of the selected eight who were awarded during the 102nd UPLB Loyalty Day, putting into the spotlight his reticent career accomplishments.

Approachable servant leader and simply human. While Roel Castro’s competence in the energy and power industry penetrates to his core, the guy is human at the end of the day. He shares laughter with colleagues, a light chat with friends and family, and he is a person who constantly moves inward for spiritual assessment.

The more humane side of this corporate servant leader is demonstrated by his love for art, especially canvases that amplify local culture and domestic sensibilities – masterpieces that offer narratives of everyday community life, portraying truths of people, places, and events that shape society.

Castro has found Iloilo City as a conducive home and he enjoys life’s boundless blessings through community service like bringing the life back to Iloilo River and civic engagements like promoting the biking culture and making the city a livable urban oasis for all. | Ted Aldwin Ong/www.ibsdigital.net