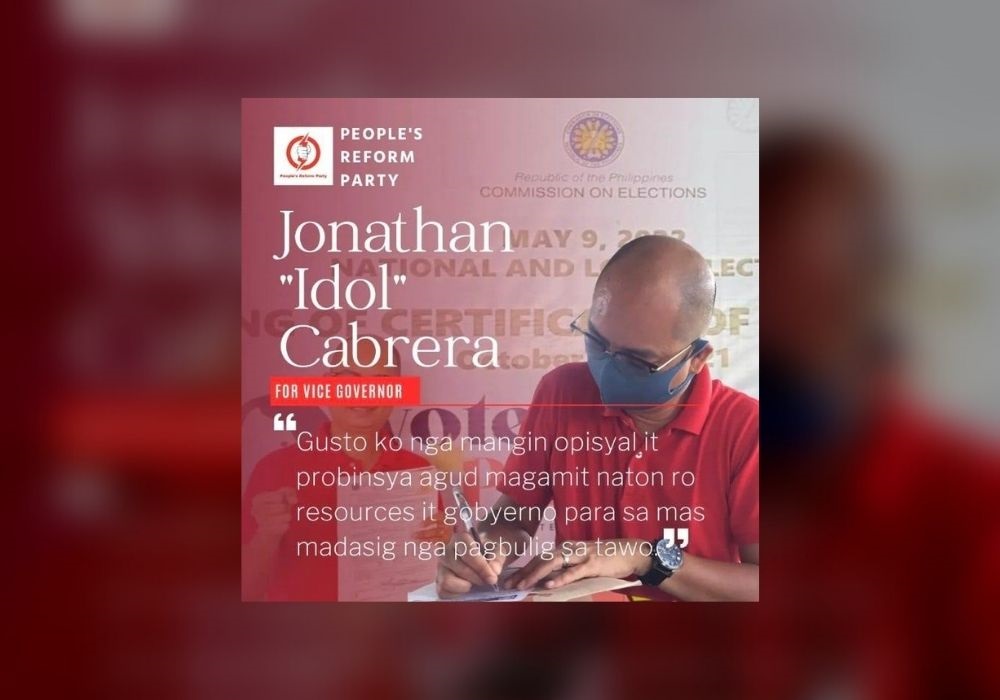 Seasoned broadcaster vies for Aklan’s vice gubernatorial post: Classified as a “regular guy”, seasoned broadcaster Jonathan Cabrera throws his hat anew into the political ring to battle with this province’s two political bigwigs for the 2022 vice gubernatorial race. In a deadline-beating filing of Certificate of Candidacy (COC) today, Cabrera filed his COC at the provincial Comelec here under the People’s Reform Party of the late Ilongga Senator Mirriam Defensor-Santiago, which he attributed on his Facebook account as, “the best President we never had.”

Coming with an impressive resume as a public servant on and off government service, the youthful Cabrera, this early, has become a favorite to win the legislative post as he is seen as the game-changer in the political landscape of Aklan province who promises to bring fresh and timely legislations that are in touch with the issues Aklanons face every day to focus on providing up-to-date and relevant news and information to Aklanons around the world.

Founder of Todo Media Services popularly known as Radyo Todo, a developing local media empire that now extends across the region, Cabrera started with Bombo Radyo Philippines and Radio Mindanao Network before he decided to start his multimedia venture in 2013 to focus on providing up-to-date and relevant news and information to the Aklanons around the world.

Aklan’s Vice Gubernatorial post: Popularly known all over the province as “Idol Jonathan” for his extra-mile effort of extending personal help and support those who come to his station, Cabrera regularly anchors the public affairs program “Todo Latigo” that airs on Radio, TV, Cable Station, Facebook, and YouTube.

Cabrera, who settled on Boracay Island since 2008, independently ran and won as Councilor of the Municipality of Malay in 2010, during which he authored various measures, most of which aimed at promoting and improving the island’s tourism sector, and environmental protection and preservation in support of its calling as the country’s jewel and tourism pride.

After a hiatus from public service, thousands of his followers, including those online, who continue to support his station prodded him to go back to the government service, noting that he can be a tremendous asset in the provincial legislature with his proven track record in local legislation.

An advocate and community organizer, Cabrera has extensively deepened his influence on the system of the marginalized Aklanons by establishing grassroots support and linking the assistance and services of the national government for the benefit of Aklanons.

Cabrera will be pitted against incumbent Vice Governor Reynaldo “Boy” Quimpo of Tibyog, the ruling political party in the province, and graduating Board Member Immanuel “Noli” Sodusta, who is also running for vice governor under a complete slate.