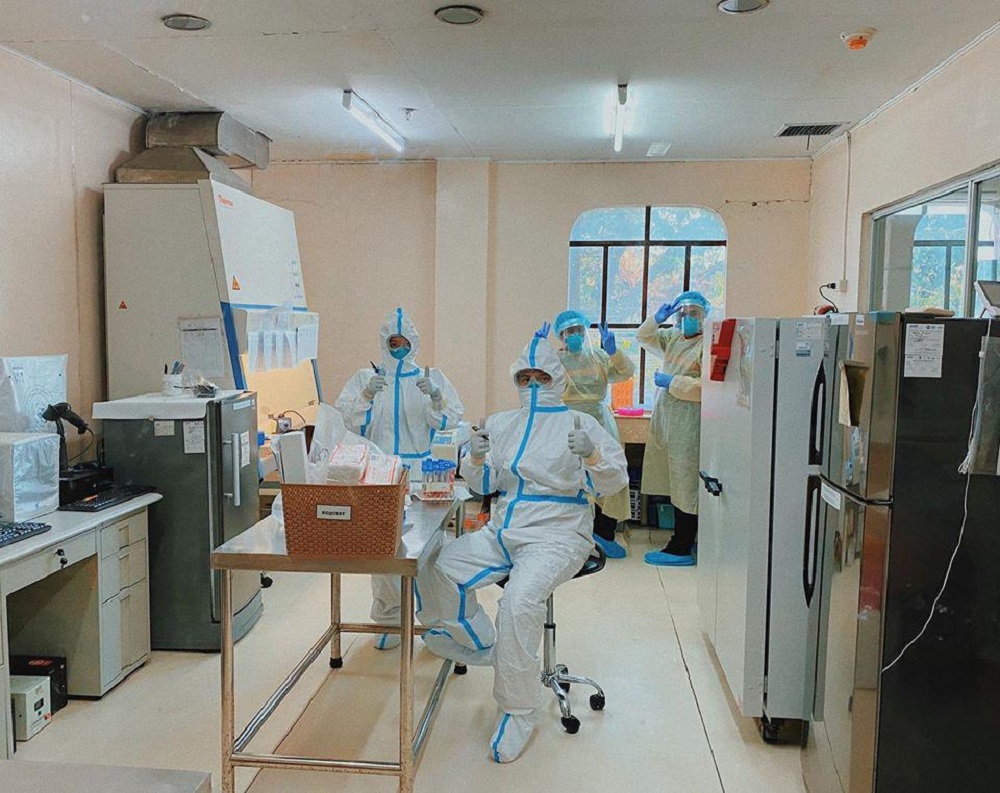 The West Visayas Medical Center Sub-National Laboratory began its construction way back in 2015. It was in 2016 when the Research Institute for Tropical Medicine started to train Medical Technologists for the testing of Arboviruses such as Dengue, Zika, and Chikungunya. Finally, in June 2017, the sub-national laboratory was launched by the Department of Health headed by then-Assistant Secretary, Lyndon Lee Suey, and Regional Director Marlyn W. Convocar.

However, for a while, the SNL has not been in actual and full operation. It was only with the emergence of the COVID-19when the center was activated. So that, the WVMC SNL headed by Dr. Joseph Dean Nicolo, Medical Center Chief, through the recommendation of the Chief Pathologist, thought of activating the testing center.

It was on March 19, 2020, when WVMC initiated the self-assessment for COVID 19 testing and immediately thereafter, the Department of Health CHD 6 authorized to send two (2) Medical Technologists, namely: Cecile E. Resol and Kathlene B. Torilla, to the RITM for proficiency testing for the period March 23-27, 2020. At the same time, through the initiatives of former Health Secretary Janette L. Garin, two (2) RITM Molecular Biologists namely: Janiza Lianne Foronda and Alexander Sadiasa, arrived at WVMC SNL to conduct similar proficiency training to other Medical Technologists. It was on March 31, 2020, when the SNL was validated and authorized by the RITM for independent COVID 19 testing.

At that time, the WVMC SNL was among those first seven (7) SNLs who were accredited for actual operation and testing in the whole country. But just like the other SNLs, they encountered various challenges and hardships. The testing procedure was just so complex that the trained and skilled medical personnel have to be very careful and meticulous because of the danger of viral leak and releasing of erroneous results.

There were reports that just last week, 43 medical personnel of RITM were infected by the virus. And also, the Marikina SNL was denied accreditation because of their failure to pass the proficiency testing of its medical staff. This is how complex is the operation of the testing center.

Dra. Stephanie A. Abello, Chief Pathologist, when asked about the testing procedures and the proficiency of her medical personnel, answered by stating that: “It is easier said than done, but I am very confident of the skill and competence of my medical staffs, they there all trained for that”. At present, the testing center is being operated by 12 technical staff and 3 clerical staff, and that has been operating on 12 hours to 24 hours daily, with an average number of tests of 200 for 12 hours operation. Additional WVMC Medical Technologists are being trained in-house to complement the COVID 19 manpower needs. It was learned however that the whole WVMC laboratory unit has a strong 168-man manpower capacity, and one of the biggest in Western Visayas.

Dra. Abello added that “at present, the lack of consumables is the main hindrance to the continuous operation of the testing center. In order to operate and test, the testing kits is only one of the major components, we need the other consumables such as the RNA extraction kit, filtered pipette tip, collection kit, viral transport media, and the PPEs. The frequent lack or absence of any of these laboratory supplies leads to the delay and stoppage of our operation”.

At present, the testing center operates with one (1) RT PCR, with one (1) back-up machine loaned from UPV. Just the other day, however, they received one (1) new RT PCR donated by the Jaime Ongpin Foundation. They are awaiting receipt from RITM one (1) new unit of Automated RNA Extraction Machine that would further hasten operation. In order to expand its testing operation, the construction of an additional Negative Pressure Room for viral inactivation is on-process.

Depending on the number of specimens received and with competing consumables, the turn-around-time (TAT) is estimated at 2-3 days. There was an instance however that it lasted for 7-8 days because they need to re-calibrate the machines and revalidate the new testing kits received, of different brands. But now, the operation of the SNL is in full swing at the maximum capacity.

As of April 28, 2020, the SNL received a total number of 3,868 specimens, 2,983 specimens of which were tested and released. The number of specimens on the process as of this time is 524 and due for release today, and thus with the remaining balance of 361 specimens.

Dra. Abello said that “We are very happy to tell the Ilonggos that the backlog is now manageable, the testing center shall be testing the current specimens collected and to sign out all back-logged specimens by April 30. As much as we would like to cater all Ilonggos to be tested, everyone knows we have limitations. We always base the testing priorities with the established protocols and identification made by the DOH Regional Epidemiology Surveillance Unit (RESU)”.

The SNL reports directly to the DOH – Central Office under the direct supervision of USec Vergeire. Just lately, they were additionally tasked by RITM to process and test the specimens coming from the other provinces, specifically the Municipality of San Jose, Romblon and Municipalities of Cuyo, Agutaya and Magsaysay, Province of Palawan.
The SNL is in constant coordination and from time to time assisting in the installation of the additional Testing Centers in the region (1) Corazon Locsin Montelibano Memorial Center in Bacolod City; (2) WVSU MC; (3) The Medical City Iloilo. WVSU Medical Center (Don Benito) also requested to send their Medical Technologists to be trained at WVMC SNL, as soon as their Testing Center is ready or accredited. Also, regularly the facility conducts Swab Collection Orientation/Training to different medical personnel of hospitals, RHUs and other frontliners particularly BJMP.

Lastly, when asked “How do you handle criticism? Dra. Abello just smiled and went on by saying “at this trying times, this is our solemn duty to serve the Ilonggos and our country. We heal as one…”