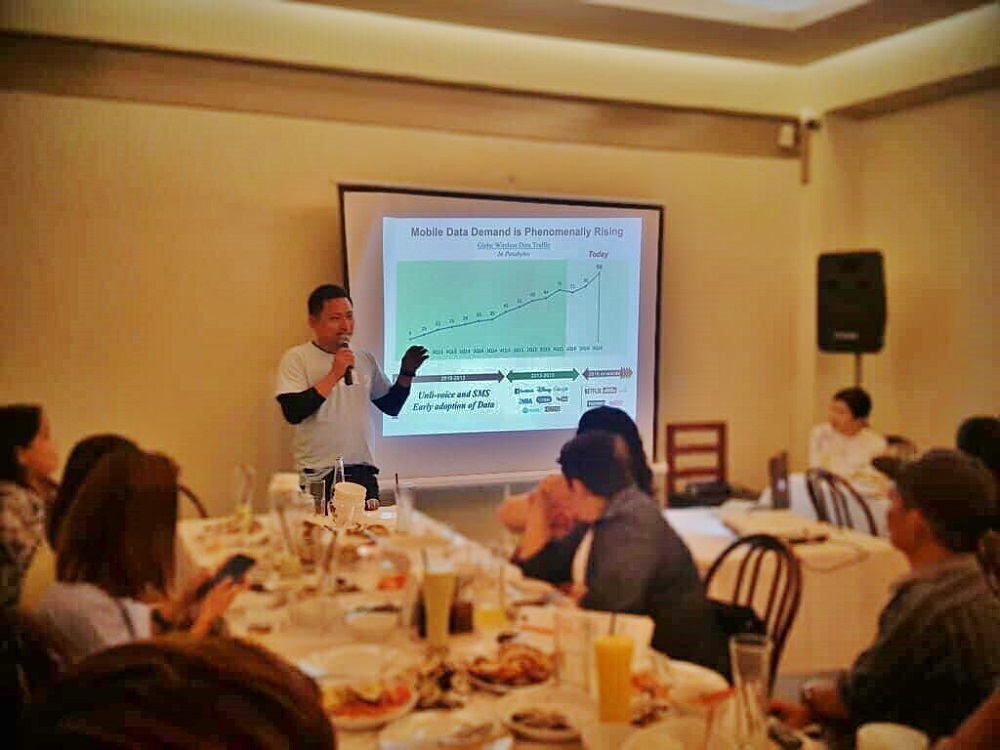 Walang Internet: It’s easy to be on the receiving end. As consumers, it’s always often easy to complain and air harsh comments. ‘The customer is always right’, and ‘we pay on time’ – are just some of what we usually hear during service mishaps. However, to err is human. And the people behind service providers are also vulnerable to errors, force majeure, and other relevant factors.

This is the very reason why Mr. Patrick Steven Gloria, Globe Telecom Head of External Affairs for Vismin, wishes to educate consumers. To date, the country’s total population is 103 million – approximately 60 million are internet users. Over the years, mobile data had a remarkable increase in terms of demand. Between 2010 to 2013, it was only unli-voice and short message service with early adoption of data. In 2013, Facebook, Youtube, and the such came to play. And in 2016 along came Netflix. According to research, the Philippines is number one in terms of time spent on social media with an average of 4 hours and 17 minutes per day. Here are reasons why connections go bad according to Globe Telecom.

Not enough cell sites to support mobile data traffic and high-speed internet. Unfortunately, the country does not have enough towers to support better speeds and affordability. To date, there are only 21,000 cell sites. Given that there are 47.13 million internet users it would mean that 2,244 people share one cell site.

Globe currently has a backlog of 3,000 sites due to permit issues. The issuance of permits can take as long as 8 months and ‘tower fees’ for sites can range from Php 5,000 to Php 200,000 per tower depending on the local government unit. According to Globe, it takes 25 permits and 8 months to build one cell site. This includes permits revolving around the right of way, social acceptability, local government, executive departments, and structural permits.

Despite the difficulty in putting up cell sites, homeowners associations can easily have them removed. Reasons can range from health risks to right of way. However, Globe Telecom assures that health risks related to cell sites are unsubstantiated. The electromagnetic spectrum shows that non-ionizing items such as television, radio, cellphone, and cell tower are not dangerous compared to the ionizing infrared, ultraviolet rays, Xrays, and gamma rays found (nuclear).

Service interference is caused by operations. Faulty connections may also be due to damage caused by Department of Public Works and Highways operations. Operations sometimes accidentally cut fiber cables.

Why is my cell signal weak? Signals need a clear line of sight. The following can diminish reception: structures such as buildings, heavy use in a certain area, lack of nearby cell sites, and thick building walls. According to Globe Telecom: when your phone signal is weak, your phone works double time to receive a cell signal. This means less battery life and more RF emissions coming from your mobile phone.

Why is the internet still slow? It is important to know and evaluate data allocation and usage in the household. Globe Telecom offers an app, Globe at Home, wherein postpaid and prepaid users can monitor and manage their Globe at Home Postpaid Broadband and/or Globe at Home Prepaid WiFi account. Prepaid users can check their prepaid balance, track data usage, and top-up or share a promo to a prepaid WiFi account. Postpaid users, meanwhile, can pay bills online, and track data usage, and purchase volume boost. Read more: How To Optimize Your WiFi At Home.

Globe Telecom is doubling its time to provide better service to users. I am a Globe user, too. At times, it sucks especially when I can’t play my favorite mobile games because of poor internet connection. However, knowing the struggles of being a provider makes me understand Globe more.